I Was Born Because of Banana Cream Pie

My visit to my parents in L.A. culminated in the baking of a banana cream pie. This pie has great significance in my life because banana cream pie was how my mom got my dad to marry her. If it wasn't for banana cream pie I would not have been born. Banana Cream was my dad's favorite pie, so back in 1958 my mom invited him over for supper at her bachelorette apartment, served him a tuna casserole followed by this luscious dessert, and the rest, as they say, is history.

I have always wanted to get the recipe for this famous "marriage pie" and finally I pinned my mom down for a look into her kitchen files. 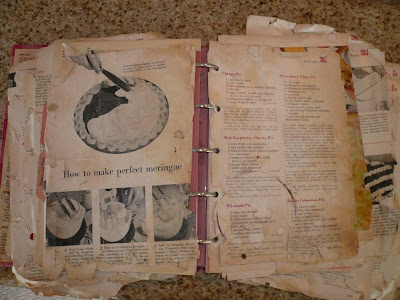 The recipe, as it turns out, simply came from the old Better Homes and Gardens New Cook Book. Published in 1953, my mom still has her original copy (pictured left), though it is difficult to read the stained and shredded pages. Luckily the company published this SAME cookbook, word for word, just a few years ago so she also has a new, clean copy too.

We set about our pie making task, a rare joint effort. She hasn't made banana cream pie from scratch since the invention of instant pudding. Quelle horreur! But at my insistence, she rummaged in the cupboards for the necessary ingredients such as cornstarch, sugar, eggs and vanilla (all were on hand) and we got started. 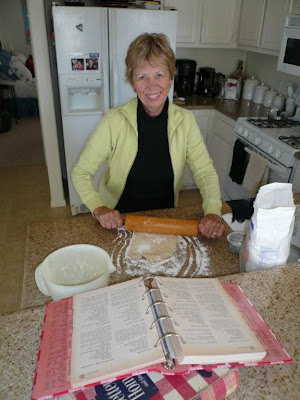 I made the dough, laying it directly on her granite countertops for rolling and discovered our first difference of opinion. "I never do it like that," she said. "I roll it between wax paper." But she was open to my technique (just sprinkle flour to stop the sticking), she took charge of the rolling pin (a wedding present she got from her mother-in-law) and we proceeded to the next step.

"I can't eat bananas," she said. So we created a banana free zone allowing for her to have a wedge of just the vanilla pudding. 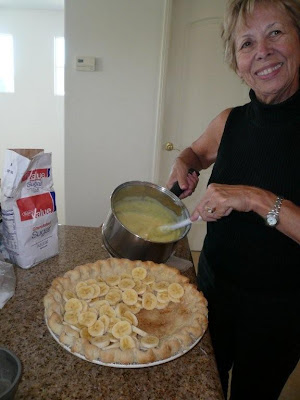 And finally the pie came out of the oven. My dad, who has been used to the instant pudding/graham cracker crust easy version for the last 20 years couldn't stop raving about what a great pie this was. So great was it that the pie plate was scraped clean by the three of us within one day. "I guess I'm going to have to start making it from scratch again," she laughed. 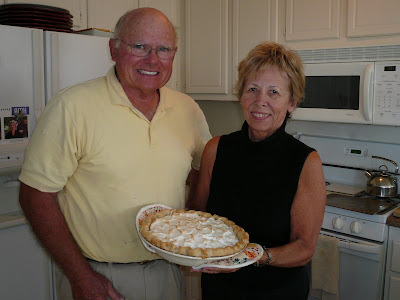 I couldn't help but note what a loving thing that was for her to say. My parents will celebrate FIFTY (50!!) years of marriage in June (2009) and she still likes making my dad his favorite pie.
Posted by Beth M Howard at 8:57 AM 6 comments:

Don't Get Mad, Get Busy

Things went from bad to worse at the dog park this week. The woman with the three big dogs was there again, and AGAIN they came toward us, surrounded us, and provoked another attack. But this time I was prepared. I had brought my dad, and we were both armed with big sticks -- more like branches, and, well, okay, possibly, one may have been a large broom handle. Yes, I know, this was very un-pie-like on my part, but it was for the sake of defending my 15-pound dog against her huge beasts, which, as you can see in the picture below, she is unable to handle by herself. 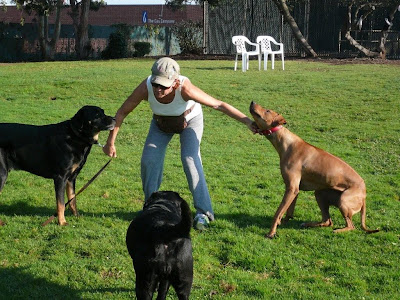 When she came to collect her dogs there were more profanities uttered, though not by me. She was as aggressive as her Rottweiler, but instead of saying a word I simply pulled out my digital camera and took pictures of her. JUST IN CASE. "You're taking pictures?" she asked incredulously. No, she didn't like this at all. My dad, however, was holding his stick up to fend off her dogs and he might have said something to her like, "I'll use this stick if you don't get your dogs away from us." She took this as a threat, said she was going to call the police, and went running back to the group of other dog owners, screaming "Help me!" We went about our own business, throwing the stick for Jack, and ignoring the group of people staring at us as she grumbled to them about us "threatening" her. Police? Did she really think she had a case?

The whole episode was very upsetting. The dog park is usually a very peaceful place, a rare patch of open, grassy space where you can legally have your dog off the leash without risking a $250 fine.

My dad and I went back a few days later, saw through the fence that this same woman was there with her three dogs, so we didn't go in. We walked with Jack on the outside of the park, along the sidewalk on the OPPOSITE side of the street. She saw us. She yelled, "You're lucky you're not in the park or I would call the police." We said nothing; we just kept walking. And then, a block later, we saw the black and white car pull up alongside of us. She did call the police! We were questioned, because, as they said, they were "required to follow up on a call." We told them our story and that was the end of that. I hate confrontation. I don't go looking for it, and when it finds me--first thing in the morning, no less, without any provocation--it is especially dispiriting.

This is when I employed some of my own, nearly forgotten advice, "Don't get mad, get busy." So when we returned home from the dog park I told my dad, "Come on, Dad. Get a broom, some garbage bags, and some gloves. We're going to clean up that sidewalk."

There is a neglected patch of sidewalk that I have been using every day during my stay in LA. It is my route to the dog park and every time I have walked this section I think, I can't stand all this litter and these weeds; I am going to come back and clean this up myself. Today was the day. DON'T GET MAD, GET BUSY. 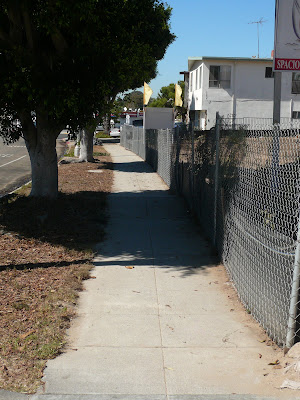 I had just researched Obama events where I could volunteer (another case of Don't get mad, get busy), but I thought, why not put the energy into a community improvement project? Isn't that what Obama's message is anyway, to be part of the solution? I know it still looks scruffy (see pic above), but you should have seen it before we started! We worked for over two hours raking leaves, picking up trash, and pulling weeds. A neighbor even came out and joined in, Marvin, a gorgeous man with two kids who "has been meaning to get out here and clean this up."

A few other people walked by. They asked, "Why are you doing this? Do you own the land?" (Why ask why?! I wondered. Why not just say thank you?!)

"No," we answered. "We're doing this because we want it to look nice, and it has been neglected." We were doing it because of the "Broken Window Theory"--if you clean up the litter, people will stop littering there. It's a theory about how keeping your community clean will help reduce crime. Really I was doing it because I wanted to transform my burning negative energy into something positive--and this was one grumpy person for whom baking a peach pie would not be an option. 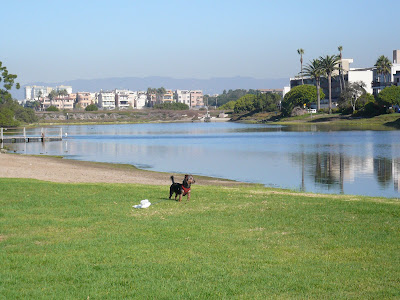 I always hope for a happy ending to troubling stories. The happy ending to this one is that I have stopped going to the dog park (even though it is a convenient two blocks from my parents' apartment) and instead I have been driving one mile down to the beach where there is an even bigger park, an ocean view, and a saltwater lagoon where Jack can swim. (See pic of Jack above.) There are never any other dogs around, and thus no hysterical, police-calling dog owners, and we have been enjoying our last days here in L.A. immensely. And now, when I take Jack around the block at night, I can walk on the sidewalk without getting scratched by weeds or stepping on a potato chip bag and know that I have helped make the world an ever so slightly better place.
Posted by Beth M Howard at 1:32 PM 2 comments: