Portland to LA...in the RV!

There is nothing like facing your fears -- and overcoming them -- to make you feel alive. Back in October I suggested in my post "8 Reasons to be Happy" that I would take our RV and drive to Crater Lake National Park, to honor the memory of where Marcus and I met. Seeing that I've never driven the thing and the idea of driving it fills me with terror, I procrastinated on that idea until the mountains were too full of snow to drive there. I came up with another way to torture myself instead. Drive the RV from Portland to LA. It was a practical concept. With the RV I could not only have my own place to stay in LA, I could use "The Beast," as Marcus and I called it, to transport my stuff from my storage unit in LA up to Portland. (I have only one small goal in life right now and that is to have everything I own in one place!) Never mind that I would go from never having driven The Beast to taking it on a 2,000 mile road trip across several mountain ranges and into the city with America's worst traffic. To use Marcus' term, I was "pregnant with the idea." Meaning, I couldn't get the thought out of my mind. And when I make up my mind....look out. 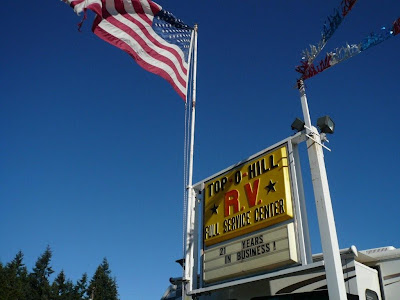 Step One: Pick up The Beast from the RV dealer where Marcus left it in August, in hopes of selling it. The thing was just sitting there, unsold, unused. Someone needed to drive it. Why not me! 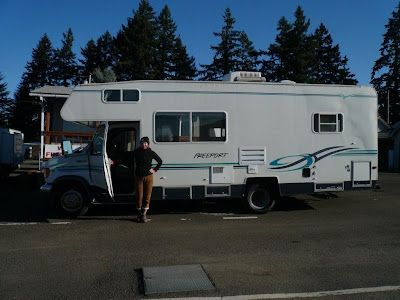 Step Two: After losing three nights' sleep from the anticipation/anxiety of getting behind the wheel of the RV, my friend Alison drove me down the dealer. "Oh, it's a lot bigger than I remember," Alison commented. Gulp. She rode along for my practice drive around the neighborhood -- so far so good -- then she followed me in her car home on the freeway, rolling along at 50 mph, sitting as high as the semis and school buses. 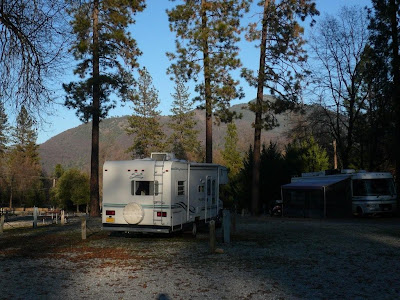 Step Three: I packed up The Beast with some food, clothes, two dogs and a new set of tire chains, praying that I will never have to use them. I drove 400 miles the first day, from Portland to Lake Shasta, and parked at my first RV park. "We have electrical outlets. You can plug in," the campground manager said. "That's nice but I don't have a power cord," I replied. He raised his eyebrow as if to say, I can see you are ignorant about RVing, and then said, "Let me show you where to find it." Sure enough, there was a built-in cord. I plugged in to the power and therefore enjoyed the luxury of having both lights and heat. I could get used to this kind of camping. I discovered hiking trails the next morning and walked for hours in the California sunshine with the dogs. I was so relieved about making it this far -- and appreciated the chance to relax -- so I stayed an extra night. 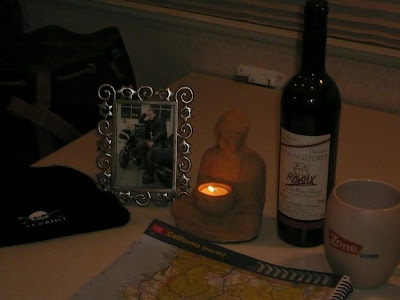 PHOTO: Have shrine, will travel. Memories of Marcus fill the RV.
I made it safely to LA and now The Beast is parked in front of my friend Melissa's house in her swanky Santa Monica neighborhood. For all that I resisted Marcus buying this thing, and then refusing to drive it all that time we traveled in it together, I have come a long way. I have faced my fears. I am no longer afraid of driving the big rig now. I haven't felt this alive or this invigorated since Marcus died in August. I'm ready for my next adventure. Where to next?
Posted by Beth M Howard at 12:19 PM 1 comment: