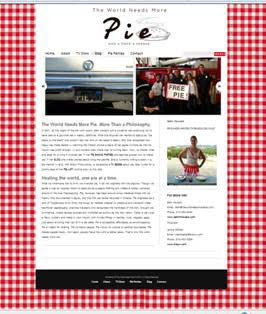 Creating our new website-- www.theworldneedsmorepie.com --was almost as much fun as filming the TV pie-lot. We needed a home to promote all the pie-related projects we've been cooking up -- pie parties, pie memoir, pie TV series, homemade pies for sale, and pie things we haven't even thought of yet. For the pie blog you can still find us here on Blogger for now, but keep checking the new pie site for updates as we'll be announcing news (like the fact I'll be a judge at the National Pie Championships in Orlando, FL in April!), previewing the promo tape (known in the biz as a "Sizzle Reel"), and more.
A friend in Paris, Jeb Buffinton, praised the new site on his Facebook page stating,
"'Give piece a chance!' Beth's new website is simply constructed, delightfully light, a bit flakey yet with substance, and the contents are warm and delectable."
Well put!
The web design -- fresh, fun, clean and cheerful -- is thanks to fellow pie lover, talented graphic artist, and creator of the Pietopia pie/writing contest, Tricia Martin.
Posted by Beth M Howard at 2:18 PM 2 comments:

Pie and Pancakes in Seattle

I’m in Seattle at the Seattle Pie Company, a new pie shop in the Magnolia neighborhood run by a darling young blond woman with the world's most welcoming smile. It’s a sweet little spot with a big display of crumble-topping pies filling the space – four giant shelves packe 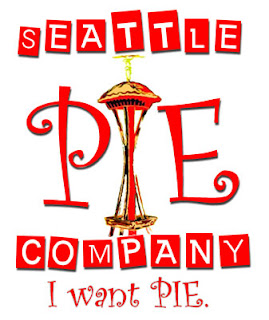 d with fruity, homemade-looking, county fair-comfort food kind of pies -- with a sign above stating “Voted Seattle’s Best Pies.” Call me crazy but I ordered a Swedish pancake to eat instead of a pie slice. (And I didn't even know tomorrow is National Pancake Day.)

I plan to drive back to Portland any minute, but right now I can’t seem to extract myself from this pie womb. You see, I’m feeling quite low today. Oh sure, I know what you’re thinking. You should have had the pie, silly woman, not the pancake! But that’s just the problem. While I like to think pie is the cure for everything, to my knowledge pie cannot cure cancer. And that makes me very sad.

I have just come from dropping off my youngest brother at his office in downtown Seattle. I watched him and the back of his newly bald head, his briefcase weighing heavy in his hand, as he disappeared through the doors of the highrise. As the doors closed behind him the knife that has already been living in my heart for the past six months twisted and gouged its way in even deeper. I don't want to lose him too!

I made the 3-hour drive up to Seattle yesterday to see my brother, who on October 26 – the same day I swallowed a radioactive iodine pill to kill my hyperactive thyroid gland – underwent surgery to remove a malignant tumor on his testicle. This is why life is not fair: I am childless and newly widowed with no job, no real obligations (financial or otherwise), no mortgage, no car payments – basically, no pressing need to stick around on this planet – and after my treatment I received a clean bill of health. My brother is married with four kids under the age of 16, with a demanding career, a family to feed, baseball games to coach, dance recitals to attend, a big lawn to mow -- he is greatly needed here! -- and after his treatment he received news that the cancer had spread. Vascular invasion, they call it. For the past two months they proceeded to pump him full of poison chemicals until he was so sick he couldn’t leave the house, let alone the bed.

He finished his chemo treatments two weeks ago and called me, excited with the news that his doctor had deemed him “clear” enough to remove the easy-access chemo port that had been sewn into his chest.

My brother is brave and positive. He is not, like his big sister, dwelling on the "what if's" and “why me’s” (or “why not me's”). While I continue to sob and wail over losing Marcus, he is donning his suit and tie every day, each morning packing lunches for himself and all the kids, going to work to earn the money to pay for the house, the soccer/basketball/baseball/swim team fees, the dance lessons, the soon-to-come college tuitions, the health insurance. While I continue to languish in my grief, my brother (who at 42 is one year younger than Marcus) has taken on the greatest fight of his life – a fight, from all signs so far, he is winning. At the very least, he is moving forward with strength and grace.

I need to stop focusing on the post-chemo pallor of my brother's skin, the sunkenness of his eyes, and the hairlessness of his body, and start focusing on his spirit – his bright, optimistic, willful, unstoppable spirit. I need to quit dwelling on the knife of grief penetrating my heart, or at least start learning how to tolerate its pain better. Marcus is gone and my endless crying is not going to bring him back. My brother is still here. He is a mighty warrior whose battle cries are not those of sadness, rather filled with hope.

What I am trying to say is, when life throws a shit pie in your face and you’re trying to wipe its mess of depression off your cheeks, I for one can look to my brother for how to deal with it. “Shit pie?” he would say. “No thanks. I’ll have a slice of attitude adjustment with a scoop of determination on the side.” To reply to that I’ll borrow a line from When Harry Met Sally and say, “I’ll have what he’s having.”

I’ve been sitting here long enough now burning up so much energy ruminating on death -- and fending off death -- that I’ve digested the pancake. To quiet the hunger pangs I’m going to order some pie for myself before I hit the road. Funny, just the thought of a piece of marionberry pie lifts my mood a little. But the thing that buoys me even more is realizing how lucky I am to have a brother who is such an inspiring human being. So inspiring that I’m going to buy him a whole pie -- the delicious-looking Desserted Island Crumble -- and drop it off at his office on my way out of town.

I'm back in Portland and my brother just sent me some pictures. The verdict on the pie was "Excellent," he wrote. "Yum." But then I already knew that because I bought a whole pie for myself too. The same kind, Desserted Island, which is a mix of berries, apples, and whatever else -- the kind of pie that has something in it to satisfy everyone's taste and the perfect pie for a gemini like me who can't make a decision when faced with too many good choices. Apple? Blueberry? Marionberry? Peach? Strawberry? How about all of them! I just finished my second piece. Indeed, excellent. Yum. It's so nice to end the day feeling better. Pie may not cure cancer but it does cure the blues. Thanks, Seattle Pie Company. 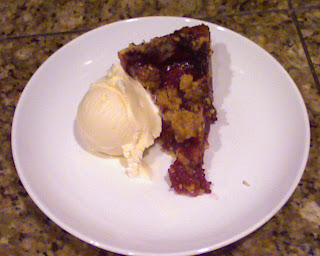 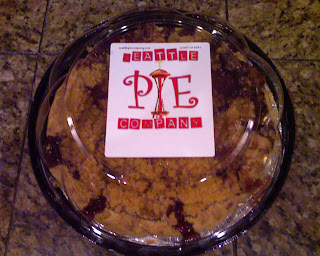