The Reality of Selling a Reality Show 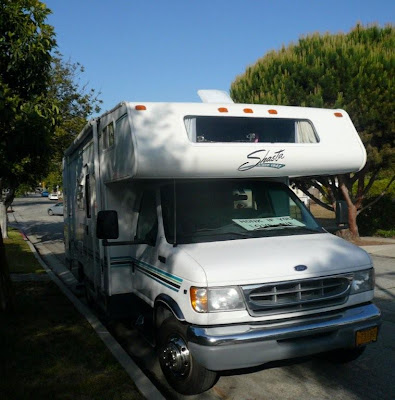 After several weeks in LA, I’m packing up the RV and returning to Portland. I’ve never been so looking forward to going back to the rainy Pacific Northwest – more specifically to the quiet, calm sanctuary of my little treehouse apartment set on the edge of a vast, womblike forest. These last weeks have reminded me that I’ve been a bit too ambitious in thinking I could resume the pace and normality of my life. My life before Marcus died. My life before that horrific day eight months, four weeks, and three days ago. And now that I look back on it, I can see not only how unrealistic I was to believe that making a TV show about pie would cure me of my grief but also how unfit I am to function normally in the world.

I learned this little fact last Friday as I sat in the office of the Vice President of Development at one of Hollywood’s biggest and most respected reality television production companies, making my pie series pitch. He was intrigued with my idea, about traveling in the RV and interviewing people around the country about pie. And he asked good questions, his first one being: Why pie? He got the whole pie-as-metaphor thing, about how pie represents generosity, community, healing, world peace. But then he grilled me on the chronology of my life.

As he sat behind his desk eating forkfuls of the apple pie I made for the meeting, I talked at rapid-fire pace about how I went from the dot com job in San Francisco to the pie baking job in Malibu, to moving to Germany to marry Marcus, to moving to Portland and then Mexico for Marcus’ job. Then I got to the part where Marcus got transferred back to Germany last summer and how I didn’t go with him. And that’s when tears began leaking out from my eyeballs.

I thought I could tell my story without crying. Sometimes I can. Not always. Not in Orlando a week earlier when I gave a speech at the Great American Pie Festival in front of a hundred people. In my speech about how pie can change the world, I almost lost it completely when I explained how it had only been eight months since my husband died. “Eight months!” I reiterated. In mid-sentence the reality of why I was standing there giving the speech paralyzed me. I’m here because I’ve turned to pie to heal my grief, baking pies and giving them away. Lots of them. The lump in my throat threatened to end my talk right then and there, but after I took a huge breath and a brief pause, I was able to resume.

I seem to have been putting myself in some highly stressful situations as of late. A speech to a hundred people? Sure, what’s a little pressure on top of a huge heap of debilitating grief. A pitch meeting at an A-list production company? Hey, why not put yourself in a position to be scrutinized for your appearance. Even with these bulging eyes permanently puffy from crying? Sure, go for it.

I’m not kidding. This meeting held so much weight I was advised to invest in getting my hair and makeup done for it. That sent me into melt-down mode. “I’m a writer; I’m not used to being judged by my looks,” I cried to my friends. “And if beauty comes from the inside, then believe me, I know just how bad I look these days. No amount of time in a god damned beauty salon is going to help.” But I did it. I spent (er, wasted) over eight hours in the hair salon and close to $600 in the beautification project.

So as I sat there in the VP’s office with my newly lightened and shortened hair, wearing my new pink lipstick – crying – I blathered on to the development executive, “Not going with him will always be one of my greatest regrets.”

After Marcus moved back to Germany I never saw him again. Until he was lying in his casket. “Good thing I’m wearing my waterproof mascara,” I joked, trying to laugh off my unprofessional lack of composure.

He asked me why I wanted to make this TV show. “So I won’t have to get a job that confines me to a cubicle,” I said. But I could tell by his raised eyebrow that he wasn’t buying my flippant sarcasm. I continued, a little too honestly perhaps, explaining, “Because I need to get busy. When we were shooting the pilot I was so interested in all the people I met, good people, and all because of pie. Plus, the shoot and travel schedule kept me completely engaged. It was the best I felt since Marcus died and gave me a purpose to keep going. I want to recreate that feeling.”

Then, clearly trying to sabotage any chance of ever working with this company, I spelled it out for him: “If Marcus hadn’t died I wouldn’t be sitting here right now. And I would rather have Marcus alive than trying to sell you some fucking TV show.” The tears spurted out even faster, making little water stains on my jean skirt. Whoa. Talk about not ready for primetime. Then again, this was a reality television company. And if grief over losing one’s far-too-young-to-die husband isn’t reality I don’t know what is.

I wiped my eyes and continued my nervous chatter with Mr. VP. Someone must have slipped truth serum into my coffee the morning of my pitch meeting because I couldn’t edit myself and my inappropriate comments. “But then, you see?” I held up my hands to him, moving them up and down to demonstrate unbalanced weight on two scales. “TV show or suicide? Okay, TV show.”

When the meeting was over and I stuck out my hand to shake his, he pushed my hand aside and said, “No. Let me give you a hug.” So maybe I didn’t scare him away after all. Still, if I could repeat the meeting I would plan it for a week when PMS wasn’t looming around the corner.

People tell me they are inspired by my resilience, by how I’m moving forward with my life, not letting the loss of Marcus stop me from living. Well, people, I have news for you. This is not resilience. This is my misguided manic attempt to keep myself from joining Marcus in the afterlife. But maybe I am making some progress, because I am finally becoming aware of my futile actions.

I’ve learned from these past few angst-ridden, hair-tampering, money-draining, tear-filled weeks in LA that selling this TV show isn’t going to fix anything. And trying to rush the grieving process isn’t going to work either. I was afraid that staying in Portland was keeping my sadness alive, surrounded by too many memories of Marcus there – which was part of the reason I drove the RV down to LA this month, to escape my dark surroundings. But after a taste of the energy and composure – and copious amounts of makeup – it would take to sell (let alone make) this TV show I am appreciating the need to stay in Portland a little longer. I need to embrace the stillness and take the time – however painfully long it takes – to honor the process, a crappy, difficult, undesirable process that is far from over.

As my grief counselor has said, “Grief is hard work.” So instead of looking so desperately for something – like making a pie TV show – to avoid the pain of grief, I need to accept that I already have a job. And as much as I wish I could quit this job, I’m going to get back to it.

The journey of a thousand miles starts with the first step. Or in this case, a full tank of gas and a big box of Kleenex.
Posted by Beth M Howard at 5:29 PM 4 comments: 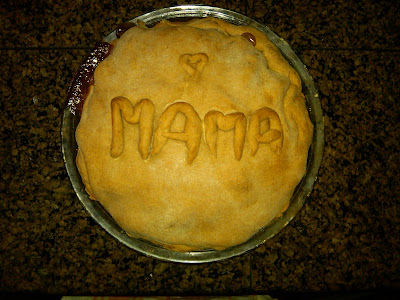 There was a lot of pie baking going on this weekend. First, my German friend Joerg in Portland called for my apple pie recipe, so he could bake a pie for his wife Katrin. He sent me the photo of his masterpiece (above). I can't wait to hear about how surprised Katrin was. I know I was impressed! 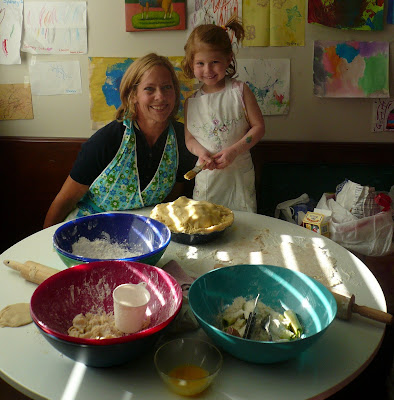 Then I went to my friend Matt's house. I hadn't seen him in about eight years (when he was still single) so it was a nice surprise to meet his wife and two kids -- Sydney (4) and Dexter (2). I was blown away by the baking skill of his 4-year-old daughter. I was planning on having her make a mini-pie, but she tackled the Big Girl pie with gusto and the results were outstanding. The perfect Mother's Day present for her proud mom Melissa. I told Matt that my afternoon baking pies with his kids was the best grief therapy I've had yet. 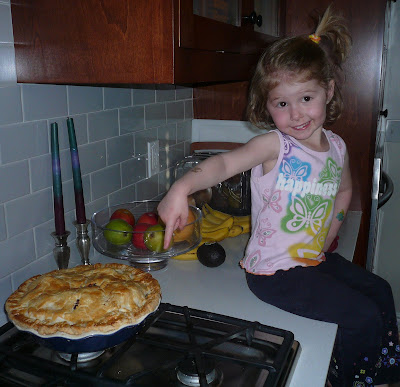 But I didn't forget I have my own mom. And since I'm staying with my parents this week in LA, this morning I baked my mom an apple pie, making the crust extra thin, the way she likes it. We had a family brunch. My brother brought her flowers, my sister brought her chocolates, my dad got her a musical card, and I set the pie in front of her on the table. Seeing as pie is meant to be shared, we all dug in. 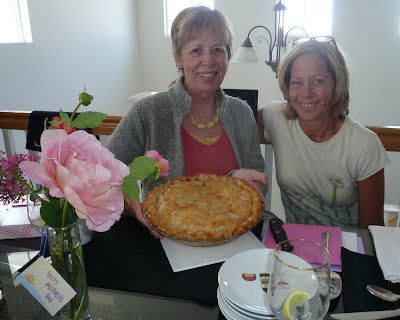 Happy Mother's Day to all you moms out there. May you all be blessed with such homemade goodness and love.
Posted by Beth M Howard at 11:53 PM 1 comment: