It's official. June 2010 now lays claim to the wettest June in Portland, Oregon's history. And the month is only half over. I'm sick of the rain. Sick of the mud. And, in fact, I'm sick -- with bronchitis. It's no wonder! This time last year I was living in Terlingua, Texas where (sun-drenched) daytime temps averaged 100 degrees. And I was perfectly healthy there. (All that vitamin D.)

Well, what to do when life gives you all this mud? Make mud pie, of course! 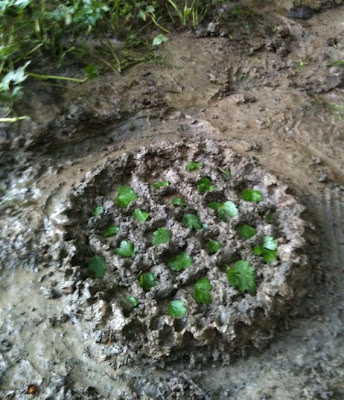 Yes, I made it myself. Complete with a lattice top. Looks delicious, doesn't it?

Clearly, this congestion in my sinuses is making me slightly delirious. Either that or I really am going a little insane from all this bad weather. (Of course, "bad" depends on your definition. Some people actually like the rain.) 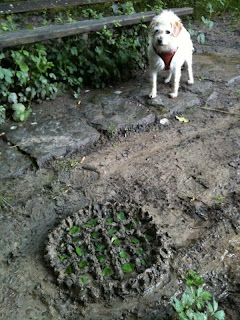 
Be careful, there may be pie fairies lurking in the forest. 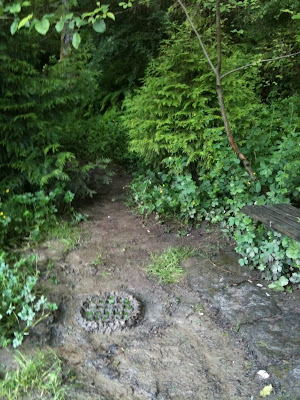 My Pie Memoir: Chapter One

I spent last summer in Texas working on my pie memoir. I was half way through it when Marcus died. The time stamp on my Word document shows the last day I worked on the manuscript was August 18, 2009, 6:04 pm. The next morning I got The Phone Call, telling me Marcus was gone. I keep trying to get back to writing my pie book. But the story has changed and I'm not ready to tell it. I did try to start again. These next 530 words are as far as I could get. Maybe someday I'll write a book about pie, about Marcus, about life...about finding the will to keep going, to keep writing, to keep making pie. Just not yet.

CHAPTER ONE (sort of)

If it wasn’t for banana cream pie I would never have been born. If my mom hadn’t made my dad that pie, the one with the creamy vanilla pudding, loaded with sliced bananas, and covered in a mound of whipping cream, the one that prompted him to propose to her, I wouldn’t be here. Think about it. The anatomical shape of bananas. The pudding so luscious and moist. The cream on top as soft as a pillow on which to lie down and inspire certain sensuous acts. They were virgins and intended to stay that way until they exchanged vows at the altar. That pie made wedding plans urgent. If it wasn’t for that pie they may never have gotten married and had kids, had me.

If I hadn’t gotten that baking job I would have never made pies for Barbra Streisand and Mel Gibson and I would have never taken time off to go on that road trip, the one where I ended up at Crater Lake National Park and met Marcus that night in the hotel lobby.

If I had never met Marcus, never fallen in love with him and his almond green eyes, exotic German-British accent, and those odd-yet-elegant leather hiking boots that laced up the sides, I would have never invited him to join me at my friends’ wedding in Tuscany. And thus, I would have never taken the train from Italy to his apartment in Stuttgart, Germany carrying that pie I made him, the apple one heaped high with fruit, drowning in its own juices and radiating the seductive scent of cinnamon, the one that made him realize I was like no woman he’d ever met before and that he couldn’t live without me, the pie that prompted him to propose to me.

If it wasn’t for pie I would have never been born. I would have never married Marcus and moved to Germany, to Oregon, and then to Mexico with him. If I had never married him, I would not have been the one listed as the emergency contact, the one who got The Phone Call that day. I never would have learned how a call from a medical examiner can only mean one thing, how harsh the word would sound in my ears – “Deceased,” he said – and how that word would haunt me, change my life, change me.

If I had never been born I would have never known what it feels like to lose Marcus, never known what his sexy, athletic body, the body I had made love to hundreds of times, looked like lying in a casket, cold, hard, lifeless, eventually cremated, his ashes buried, never to be seen again.

If only my mom hadn’t made my dad that banana cream pie. Fuck pie.
Posted by Beth M Howard at 9:52 PM 2 comments: