Pie As a Peace Offering

Making pie always makes me feel better. Which is why I’m making a pie tonight. Apple. I’m making the pie because my neighbor yelled at me, more like shrieked actually, because my two little terriers had walked on her lawn. She came rushing out at me through her front door in a wild panic. “Get your dogs off my lawn! There is a leash law! Get them off!” This reaction seemed a bit extreme for such a minor offense. There was no poop or even pee involved. Just a few little lightweight paws stepping delicately and innocently on her freshly cut yet highly resilient blades of grass.

She has been watching me through her blinds for the three weeks I’ve lived here. I know that because when I replied, “I’m so sorry. Oh and my apologies too for not introducing myself sooner. I’m your new neighbor,” she screeched back in a voice that sounded like she had shut her hand in a car door, “I know who you are!” And with that she retreated into her witch’s cave, I mean her double wide trailer, and slammed her door so hard even the earth shuddered. I took my dogs back to my house, shut them inside, took a few calming breaths and ventured back across her grass, aware that she may not want humans trespassing on her lawn either. I knocked on her door. Three times. I could see through the stained glass window of her front door that the television was on. Nope. No answer. So I left. I returned home. And then I cried myself to sleep.

I had been warned of this neighbor. Every new person in town I’ve met, upon introduction warned me. “You live in that house? Have you met your neighbor yet? She doesn't like dogs.” I shrugged it off. I had lived in Germany for several years. I was used to being reprimanded. At the grocery store for the wine bottles not lying down flat on the conveyor belt. At the dry cleaners for removing the cleaning instruction tags from my wedding dress. While walking my dogs in our Stuttgart neighborhood where a grumpy old lady said in German, “Don’t let your dog pee here. If one dog pees then all the others will too.” Those reprimands shouted out in a foreign tongue sent me home in tears each time. I couldn’t understand what they were saying; I could only grasp the tone –über harsh – and worse, I couldn’t come back with a defense because I couldn’t speak the language well enough. But this. This was pure English. I could fight back in my Mother Tongue, but she slammed the door on me before I could say a word.

I spent the entire evening and all the next day composing a letter to her in my head. What could I say to make peace with someone who is clearly as bitter as unripe gooseberries with life? Should I apologize? Should I defend myself and remind her that even though there is a leash law the dogs can be off leash in my yard, which is breathing distance from hers? Should I pull the Grieving Widow card and tell her I am still recovering from the loss of my 43-year-old husband and how if not for these “offending” dogs keeping me company, making me laugh, and forcing me out from under the covers to walk them several times a day I wouldn’t have survived this past year of darkness? No. For someone who like a third grade tattle-teller has already called the mayor -- the mayor! -- twice to complain that my dogs were on her lawn – instead of coming to me directly – a note wasn’t going to make any difference. It had to be something more powerful than words. And that, of course, would be pie.

“Don’t feed hate with hate,” I read in my Book of Daily Meditations, a timely entry that reminded me this woman needs love. I don’t know what happened in her life to make her so deeply unhappy. I know she is not a grieving widow as I see her husband outside mowing that lawn. Often. He doesn’t cut the grass short, which means he has to cut it more frequently. Which means he spends more time outside. Away from her. But what could possibly make someone so mean? I pondered the possibilities, racking my brain with scenarios of life’s many disappointments, until I realized I was spending far too much time on the subject. And so, instead, I turned to the thing that brings me peace, calm, fulfillment and hopefully will bring a taste of happiness, even if just a momentary glimpse, to a neighbor who needs it. Pie. Pie fixes everything. And if it doesn’t, well, she is leaving on Sunday for Arizona. For the entire winter. The snow will have melted by the time she comes back, leaving no trace of doggie prints on her lawn.

POST NOTE: I was so preoccupied when I made the pie I forgot the sugar and cinnamon! That NEVER happens to me. No problem. I figured the crumble topping would make the pie sweet enough and just sprinkled the missing cinnamon on top. But then the pie got scorched in the oven. A burnt pie does not a good peace offering make. Guess an apology pie will have to wait until spring. Until then, the peace (and the burnt pie) is all mine.
Posted by Beth M Howard at 11:11 PM 4 comments:

No one told me when I rented the American Gothic House that I was going to get corralled into doing things out of my normal scope of life. But then moving from Portland, Oregon to Eldon, Iowa (pop. 967) and into a house listed on the National Register of Historic Places was already way out of my normal scope. So, in the spirit of jumping in with both feet and immersing myself in my new community, I am saying yes to everything.

"Do you want to ride on the American Gothic House float in the Eldon Homecoming Parade dressed up as one half of the couple?" YES. 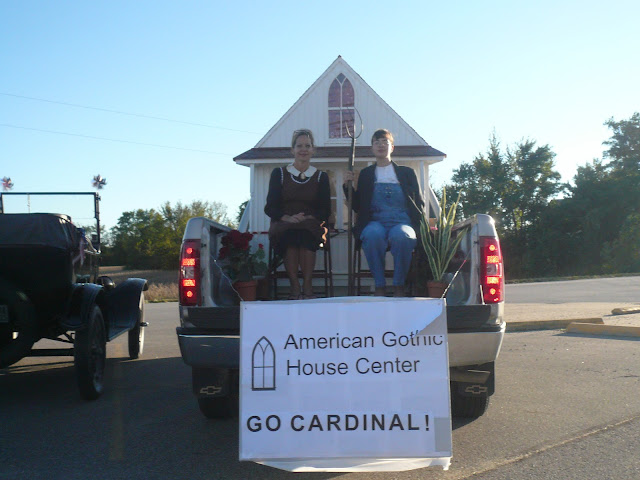 "Do you want to come to the potluck dinner being held for the volunteers of the American Gothic House Center?" YES. In fact, since it's raining and I just spent two weeks scrubbing my floors and only today unpacked the last of my moving boxes, why not just invite all 25 of them into my new house for dinner?! Yes! 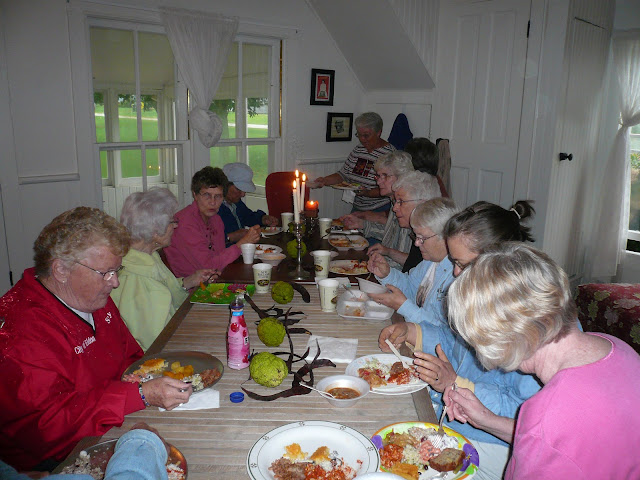 "Do you want to come to the Gothic Area Tourism of Eldon (G.A.T.E.) meeting on Monday night?" YES. And as long as I was there, why not volunteer to put my house on the Christmas Home Tour so the town can sell more tickets and raise more money -- even though I don't own one Christmas decoration and will have about 100 people traipsing through the house in their snowy boots. Yes. (I did not, however, volunteer for the Santa Claus committee, nor for helping with Bingo night.)

And, last but not least, "Do you want to open a pie shop in town?" This question was posed to me by the mayor herself, Shirley Stacey, not more than 30 seconds after meeting her. "The town really needs it," she insisted.  Well, why not?.....YES.  Tomorrow morning I go to look at the space Shirley had already picked out for me before I had even arrived in town! Cheeky thing, effective mayor.

Opening a pie shop is something I've been talking about for more than 10 years. If not now, when? Forget normal scope of life. Or, maybe this is what I heard people talk about during grief counseling, "This is the new normal." Normal, new normal, abnormal -- no matter how you label it, saying YES feels good.
Posted by Beth M Howard at 11:20 PM 6 comments: