Humble Beginnings of a Pie Business 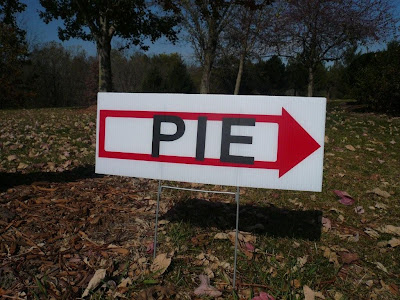 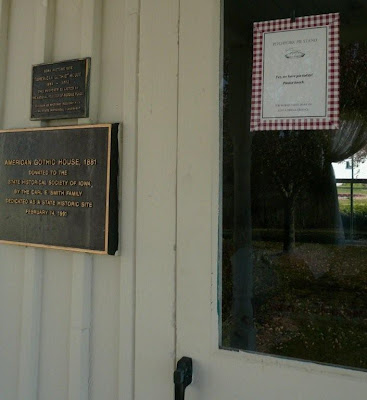 ﻿﻿The weekend weather report says there will be rain, so we moved the pie stand (which, thus far, consists of one big table) into the living room of the American Gothic House. Regardless of the day of the week, the sign on the door will tell you if there's pie available all you have to do is knock!﻿ Bonus: you get a glimpse inside the famous house. 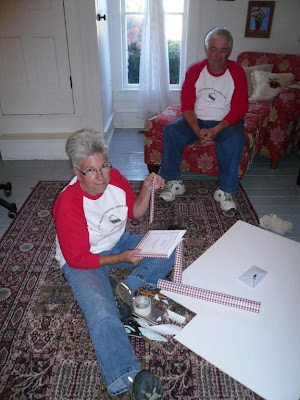 ﻿Here's my Aunt Sue, above (Sue Finn of Mason City, IA). She and my Uncle Mike stayed overnight last night. If you come here to visit, be prepared to work. Peeling apples, making crumble topping, rolling dough and assembling bakery boxes are just a few of your job choices. Or throwing the stick for my dog.﻿ Honestly, that would be the biggest help of all. 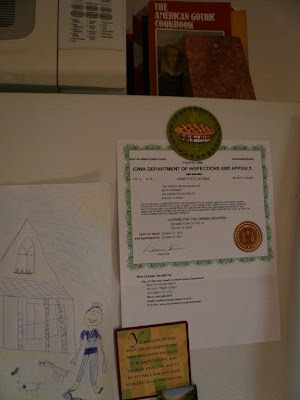 ﻿Adding to the artwork collection on my refrigerator door is my "License for Home Baking." I passed inspection with flying colors. If you look closely, you will see the "American Gothic Cookbook" on top of my fridge. I found it for $3 at an antique store.﻿﻿ No, I haven't tried any recipes from it yet. I'm too in love with the "The Amish Cook at Home" cookbook right now. 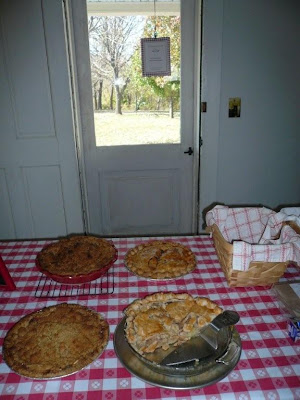 ﻿﻿These are the humble beginnings of the PITCHFORK PIE STAND. I'm pretty sure the American Gothic House has never smelled so good. My customers have commented that they can smell the pie outside as well!﻿ 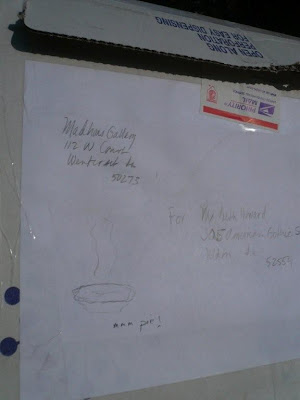 ﻿A customer returned an empty pie plate via Priority Mail. The pie sketch on the box reminds me of the Tom Hanks movie "Castaway," when he saved the FedEx box with the angel wings sketch for all those years. Pie. Angel wings. Same meaning if you ask me.
﻿ 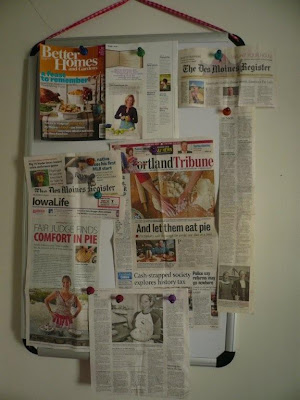 ﻿I complained to my Aunt Sue when we assembled this last night that the "Media Wall" was too vain, but she insisted, "THIS is business." I guess you could look at the slew of publicity as "added value." And, I have to admit, I am kind of excited about being in this November's issue of Better Homes & Gardens. (If you get the magazine, I'm on page 22.)

We are off to a running start. Sales were booming today, there will be more pie baking tonight, and so it goes. Healing the world, one pie, one slice, one day at a time.
Posted by Beth M Howard at 4:58 PM 4 comments:

A Funeral in Front of the House 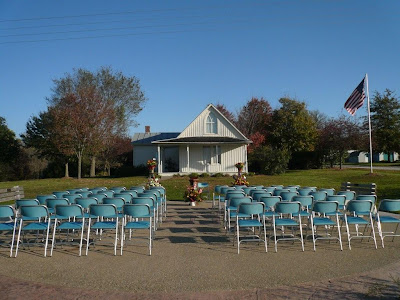 You can run but you can't hide. From grief, I mean. I was reminded of this on Saturday when at 8:00 a.m. I saw Brenda Kremer, owner of Kremer Funeral Home in Eldon, walk up the path to my house with two men in tow. All were carrying folding chairs. I knew why. I was informed a few days earlier there would be a 10:30 a.m. funeral service for Helen Glasson in front of the American Gothic House. Helen was the granddaughter of Gideon and Mary Jones, the owners of the house at the time Grant Wood created his famous painting and, thus, made the house famous. Helen was passionate about preserving Eldon's history -- not just her grandparents' house but also the McHaffey Opera House -- and spearheaded the creation of Eldon's G.A.T.E. Tourism Board and the visitor center, the American Gothic House Center﻿. But by the time of the ribbon-cutting ceremony for the Center (three years ago), her Alzheimer's had advanced to the point where she was able to attend the celebration but, sadly, was not aware of why she was there.
Given my new residency of the house, it seemed fitting that I pay my respects. But I need not have bothered debating whether or not I should attend the funeral. The answer presented itself.
Sometime between the time Brenda and her crew finished setting up the chairs, flower arrangements and CD player and the time the funeral attendees arrived, I took a stroll out front. This was not a good idea. The sight of the flower arrangements reminded me of Marcus' funerals -- both the one in Portland and the second one in Germany, just over one year ago. That, combined with an instrumental version of "Morning Has Broken" by Cat Stevens on the CD player, sent me running back inside the house. I locked the door behind me and collapsed on the sofa in a fit of tears.
I've been so busy since I left Portland on August 1 -- driving cross country, judging pies at the Iowa State Fair, touring my childhood stomping grounds, moving into my new house, fielding media requests, and starting a pie business -- that I'd almost forgotten what grief felt like. But there it was. Flooding back. Oh yes, I remembered it well. Grieving is like riding a bike. You never forget how to do it. Because it never goes away.
No, I would not be going to the funeral. They wouldn't want the distraction of a sobbing mess like me in their midst.
In the midst of my bawling session I thought of Brenda Kremer. Brenda lost her husband less than two years ago to pancreatic cancer. (Can I just interject here: CANCER SUCKS.) But here was Brenda, organizing not just this funeral, but having taken over her late husband's business, she organizes every funeral in Eldon. How does she do it?! I wondered. How can she survive when she is constantly reminded of loss? That soul-wrenching, heart-shattering loss that leaves one permanently wounded and lost, going through life feeling like a leaking vessel, or missing a vital limb. I vowed to ask her. When the time was right. That time would surely not be today.
I eventually uncurled from the fetal position and extracted myself from the couch to call my friend Jim in Virginia, telling him how the proximity of this funeral had triggered a grief burst. "You always talk pie about how pie heals," he said. "Why don't you get busy and do something that makes you feel better. Go make some pie."
He had a valid point. Especially as it was the opening day of my Pitchfork Pie Stand and I was scheduled to set up my table outside after the funeral. I hung up the phone, dried my eyes, rolled up my sleeves (and I don't just mean figuratively), and made seven more apple pies for my launch.
But before I began baking I lit a candle in the living room. For Helen. It was my way of participating. In the only way I was capable at the time.
I pulled the kitchen curtain shut so the funeral attendees wouldn't be distracted by my movements in the kitchen -- and I wouldn't have the constant reminder of all that sadness -- and eventually lost myself in the creative, meditative process of pie. Akin to running a marathon or biking up a mountain pass, making pie puts you "in the zone." It's like a spiritual transcendence, and it really does heal.

What is almost more healing than making pie is watching the joy with which people eat the pie. I sold out of my pie inventory in less than two hours and in that short span of time I met some of the most interesting and nicest people from all over the U.S. -- including the grandchildren of Helen Glasson, a sophisticated, articulate bunch who had scattered around the Midwest and reassembled for the funeral. I let them tour the inside of the house. “Please excuse the pie baking mess in the kitchen,” I said. “But feel free to look around. Take your time.” It seemed fitting. With the exception of my furniture and clothes inside -- and the fact I pay rent --the house feels like it belongs more to them to than to me. The Glasson Family was grateful for the tour. And I was grateful for them buying pie afterward. It was mutually beneficial, a salve on a day with a somber beginning.
But the day wasn’t over yet. A little later I spotted Brenda Kremer walking up the path toward the house again. This time she wasn’t in her Sunday Best. She had changed into jeans and was surveying the grounds to make sure everything had been cleaned up after the service. I stepped out of the house to meet her. I put my arm around her shoulder and walked with her up the sidewalk and said, “I am amazed by your courage. I don’t know how you do it. Just seeing the flowers tore me apart.”

We had only been introduced once and never really had a conversation before. And yet I felt her body relax under my arm with the relief of finally broaching the subject. “I heard about your husband, too,” she said. “We should talk sometime.”

And there it was. A Grief Support Group -- and I hope an important new friendship -- instantly formed in Eldon, Iowa.

Rest in peace, Helen. Thank you for your vision and effort in establishing the visitor center and preserving the house I now call home. 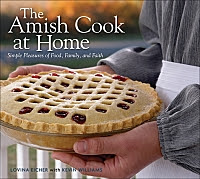 Recipe from "The Amish Cook at Home" (used without permission from Andrews McMeel Publishing...sorry, and thanks!)  I don't know if this was served at Helen's funeral, but I love the concept -- and love the Amish approach -- so I wanted to include it.

Raisin Pie is a funeral tradition with the Amish "because the thick pie is a comfort for the grieving family."

Preheat oven to 400.
Put the raisins and 2/3 cup of the water in a medium saucepan and heat over medium heat for 5 minutes.
Combine the sugars, cornstarch, spices and salt in a medium bowl and, stirring constantly, gradually add the remaining 1-1/3 cups water. Add this mixture to the raisins. Cook and stir until the mixture starts to bubble. Add the vinegar and butter and heat until the butter is melted. Remove from the stove and let cool until just warm.
Pour the filling into dough-lined pie dish, cover with the top crust, trim and then crimp the dough edges. Cut decorative slash marks into the top crust. Bake until golden brown, about 15 minutes. Remove from oven and cool completely.

Here's the result of Mike Borland's Friday visit to the American Gothic House. I have to admit, it's great publicity for the launch of my PITCHFORK PIE STAND. Thanks to everyone who partcipated. And thanks, too, for believing in the healing powers of pie.


Pitchfork Pies from Mike Borland on Vimeo.
Posted by Beth M Howard at 8:40 AM 2 comments: