If you replaced “banjo” with “gunshots” this would perfectly represent Beth’s sentiments about hiking in these parts. It’s the height of deer season here in Georgia, and at times it sounds like the civil war is still ongoing. Although Beth and I share our Midwestern roots (Beth Iowa, me Ohio), I have lived south of the Mason-Dixon line for over 20 years, and I am well acquainted with the Southern Appalachians. I even lived in Top O’World Tennessee at one point, a place where a neighbor once showed up at my door with a large jar of canned bear meat.

Beth however, (in-spite of her many world travels) is pretty much a neophyte in Dixie. She gaped in slack-jawed horror at the 30-foot-long confederate flag waving in the breeze over the local Rebel Market and gas station. I explained that the owner of this establishment would likely explain to her that the flag is an expression of “heritage not hate,” but to say that she remained unconvinced would be a notable understatement...

But...Beth is quickly finding that there are good as well as gun-toting rebel elements in N. GA. Yesterday I took her to breakfast at a place I was clued into by a local several years ago. It’s a small country store with a restaurant of sorts tucked back into one corner. One GOB (good ole boy) cooks and serves. If you do something silly like not ordering any meat, he’ll put some of his homemade sausage on your plate anyway. And you don’t get a ticket when you’re finished, you just amble over to the cash register and tell the lady what all it was that you ate and drank. Beth was dubious when I set a plate down in front of her that contained a huge halved biscuit smothered in gravy, two fried eggs and a piece of sausage. 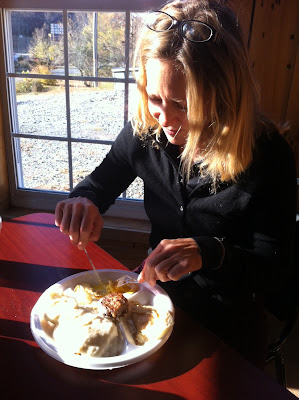 But now? Now she is asking me when we are going back.

She is not, however, asking me when we are coming back to this particular cabin. This cabin affords privacy and a nice view but it has some notable drawbacks. One would be a death defying road that leads up to the place. It’s steep enough to be a bobsled run, has places with ruts big enough to swallow a SMART car whole, and has a blind hill that the stars of the FUEL TV series “Thrillbillies” would shirk in terror from. And if you survive the road up here, there is an equally deadly feature that awaits you inside of the cabin. Through reading the cabin guest book, we found that this wooden horror has a name. Behold, the Stairs of Death... 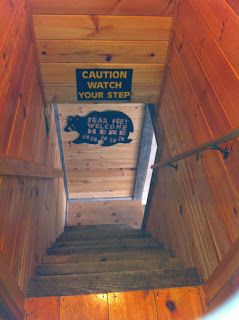 If you’ve ever been to the amusement park Cedar Point in Ohio, just think of the ride named “Demon Drop” as this is merely a non-mechanical version of it.

There is another feature of this cabin that while not dangerous, is nonetheless somewhat horrifying: the décor. One family wrote in the guest book that they tried for days to count all of the assorted bears inside the cabin, but it was simply too exhausting and mind numbing. After about 5 minutes on the inside, Beth declared, “No, I can’t take it” and proceeded to apprehend armloads of stuffed bears, bear statues and a moose or two and jam them into closets. We have one closet that now looks like a décor bear version of Gitmo. They will stay incarcerated until freed by the cleaning service after our departure.

But today it is sunny and nice and we are going horseback riding in the mountains. We may not make it back up the road to the cabin, but up until that point it will be a great day.

Note to readers: Daisy is doing much better. We will probably leave here a day or two early so she can be part of the early release program at the kennel.
Posted by Beth M Howard at 11:51 AM

I live in Georgia, you should have shared the name and location of the store/cafe. Sounds like a place my DH would enjoy. You should have come a little farther south. Georgia is lovely this time of year.

The store is called L & A Corner General Store. It's in Cherry Log, GA. Here's a link to their Facebook page: https://www.facebook.com/pages/L-A-Corner-General-Store-Grill/283400335933