In June 2003, I moved to Stuttgart, Germany to marry a smart and sexy automotive engineer, Marcus. It was the year Europe had record-breaking triple-digit temperatures. One of the first German words I learned, a word that still sticks with me the way the layers of sweat did that summer, was Hitzewelle. Heat wave. I spent my first three sweltering months in Germany sitting in steamy classroom enduring a five-hour-a day language immersion course with students from Turkey, Greece, Romania, Russia, and Ecuador. I learned—or tried to learn but never really quite grasped—grammatical rules like compound nouns, which are several words strung together to make one word longer than the alphabet. Even more mind numbing was the assignment of articles to nouns, having to memorize genders that never made sense. In German, there are approximately six ways to say “the,” but you have to know which version goes with which word. Why was a little girl given a neutral article (das), a loaf of bread male (der) and a fork feminine (die)?  It was worse than Sister Mary’s high school algebra class. Way worse.
That was just the beginning of what became a frustrating first year in Deutschland. The tales—or misadventures or, er, nightmares—began mounting faster than the numbers on our outdoor terrace thermometer. I got yelled at by the dry cleaner for having champagne stains on my wedding dress when I brought it in to be cleaned. “But it was my wedding!” I stuttered in my beginner’s German. At the grocery store I got reprimanded—more like publicly humiliated—for not laying my wine bottles down on the conveyor belt. I didn’t fight back; I went home in tears. And when we got a puppy, I was told in no uncertain terms by an elderly neighbor woman that I was not to let my dog pee there. “If one hunde pees, the rest will also pee there.” On top of it, my husband worked until 9 o’clock most nights, leaving me to feel isolated and angry. 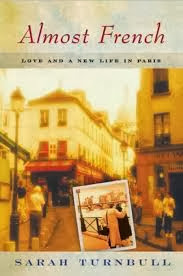 Not long after I arrived I discovered a newly published book. I don’t remember who told me about it, but I do remember that when I began reading it I was enthralled. It was called “Almost French,” by Sarah Turnbull. Turnbull, an Australian, had married a Frenchman and moved to Paris. With each page I turned I felt I was reading my own story, taking place in the country just west across an unmanned border from where I was sitting. I laughed as I read of Turnbull’s mishaps and madness, not with Schadenfreude, but with familiarity, solidarity, sympathy. It was helpful to know I was not alone. Yet in spite of her identical run-ins and reprimands in her newly adopted country, I couldn’t help feel envious. She was in France! The language was prettier. The clothes were more fashionable. The croissants were flakier.  Why couldn’t I have fallen in love with a Frenchman?

I asked Marcus about the harshness I observed daily in German life, about the constant reproach doled out by shopkeepers, neighbors, random passersby, and the like. “How can you stand living in a place where people are so rude to each other?” I wanted to know.

“I never really noticed it before you pointed it out,” he said. “I guess I’m just used to it.”

Still, I loved my husband. Even if I did not love his country.

A writer myself, I had my own version of “Almost French” in the making. I was filling the pages with my personal saga, calling it “HausfrauHoneymoon.” In my search for a publisher I contacted Turnbull’s editor in New York City, Lauren Marino. When I got Lauren on the phone (international calls are very cheap from Germany), I explained that I was in Europe and asked how I might get in touch with Sarah. “Oh, she’s not in Paris anymore,” Lauren said. “She and Fred moved to Tahiti.”

TAHITI?! I was floored. I came up with my own interpretation of this news. Maybe Turnbull got so fed up with France that she persuaded her husband to move. Tahiti, I surmised, might have been a good compromise given it was relatively closer to Turnbull’s native Australia, and as they speak French it would be a likelier place her lawyer husband could work.

Marcus had promised me when I moved to Germany that we would only stay two years. The clock was ticking and I was ready to go. That evening, I pounced on him the moment he walked in the door, waving Sarah Turnbull’s book wildly. “They. Moved. To. Tahiti!” I screeched. What I didn’t say but what I’m sure he heard was: “I want to go with them.” I had been to Tahiti and I remembered the vivid greens, blues, oranges, yellows, and reds that made the tropical paradise feel so alive; I loved that so many buildings had thatched roofs; and my favorite was the special mailboxes designated for home-delivered baguettes. All this made the contrast of Germany’s cold glass and steel architecture and uninspiring shades of grey seem even colder and greyer. Where would we move when the time came?

As it turned out, we moved to Portland, Oregon. Lush, yes. Warm and tropical, no. During that time I completed my manuscript for “HausfrauHoneymoon” and even had interest in it from Sarah Turnbull’s literary agent. I wasn’t stalking Sarah; I simply had a similar tale and believed there was a market for a romance set in Germany. The agent’s interest wasn’t enough to sell the book, though. The agent said, “Germany just isn’t romantic enough.”

“Yes! That’s exactly the point of my story!” I tried to explain.

After Portland we moved to Saltillo, Mexico. Not the tropical part of a country popular for its white sandy beaches, rather a high desert mountain town known for its burgeoning growth of industry. While Marcus spent his days building a truck factory, I spent mine trying to learn Spanish, the words often coming out in a confused jumble mixed with German. There were no baguettes delivered to our door, only the weekly propane truck, which stopped by to fill the tank that fueled our stove and wall heater.
When Marcus’s assignment in Mexico was up he was transferred back to Stuttgart. By that time the frequent moves—and increasing arguments about why his job had to dictate where we lived and why we couldn’t just pick a place where we could both be happy—had taken a toll on our marriage. I asked for a divorce. He agreed to it. And seven hours before he was to sign the papers he died suddenly and unexpectedly of a ruptured aorta. He was 43.

I did end up getting a book published, called “Making Piece.” But it wasn’t the story I wanted to write. It wasn’t the fish-out-of-water tale about falling in love and coping with life in a new country and adapting to a foreign culture. It was about how I survived the first year of my grief. About how I would have sold my soul to go back in time. How I would have even agreed to move back to Germany and promise never to complain about the difficult language or the brusque shopkeepers or Marcus’s late work hours.

All the while, throughout the 10 years since I first read “Almost French,” I have never stopped searching the Internet for news of Sarah Turnbull, hungry to learn what happened since she moved to Tahiti. I wanted to know if her story had a happy ending. I was convinced it did. I never found a thing, other than the Amazon order link for her first book. Until yesterday. 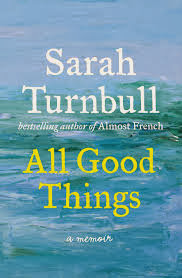 I was wandering through Vroman’s Bookstore in Pasadena, California. After browsing the biographies, I moved to the travel writing section to show a friend one of my all-time favorite books, Bill Bryson’s “AWalk in the Woods.” I ventured to the next shelf on the right and picked up another favorite, “Holy Cow: An Indian Adventure” by Australian Sarah Macdonald. And then, further still to the right, the name Sarah Turnbull caught my eye. It wasn’t “Almost French.” It was something else. A hardcover titled “All GoodThings.” I squealed and leaped the way my Jack Russell terrier does when his excitement is uncontainable. “Oh my god! I had no idea she wrote another book!” I snatched a copy off the shelf and searched for the publish date. It had only been out for a few months. How did I not know about this? Its subtitle was “From Paris to Tahiti: Life and Longing.” I began explaining the story to my friend, telling her how much I had loved “Almost French” and how I had been waiting and hoping—and waiting and hoping and waiting and hoping—for her sequel. And here it was. I wanted to sprint to the cash register to buy it. I was talking so loud and enthusiastically that another customer came over and asked me to fill her in. After my little Sarah Turnbull rain dance, she too picked up a copy to purchase.

I stayed up until 3 a.m. last night reading “All Good Things.” I’m not done yet and I wish I could be reading right now as I am anxious to devour her story. The story picks up where “Almost French” left off and even describes the heat wave I lived through that summer of 2003. And yet, it appears that during these past years while I was dealing with my own woes and life-altering tragedy, Turnbull wasn't exactly living a dream life in tropical paradise either. Our stories are no longer parallel. We both left Europe, but our paths diverge from there. I lost the man I loved while she added new life to her world. She has a son. And from reading her bio I see that she no longer lives in Tahiti, but is now living in Sydney, Australia. And yes, she is still with her French husband, Frederic.

I always wanted to believe in the happily ever after, but I’ve learned that life is too imperfect and unpredictable for that. I no longer read stories expecting—demanding—to have happy, neatly tied up endings. I am content to settle for stories that leave me with a feeling of hope. I know from Turnbull’s writing—her gorgeous descriptions, her elegant style, her ability to tell just enough without oversharing, her patience, her wisdom, her grace—that “All Good Things” is that hopeful kind of story. I can’t wait to get back to her pages.

I just wish I could wave the book in front of Marcus and give him the update and Die gute Nachtricht. It's always nice to share good news.
Posted by Beth M Howard at 8:08 PM 7 comments: