A Visit to Malibu & My Old Pie Baking Store

Remember how the pecan tree inside the house had to be stripped of its leaves due to a fungus? Turns out the problem was MUCH more pervasive. We discovered a serious mold problem, waking up each morning to new growth in places like our shoes in the closet and even under the bed! Adding to the stress, our neighbors told us this is a pre-existing condition that drove the previous tenants out, all of which was conveniently denied by our landlords. My husband saw how the situation was affecting me -- as in I WAS GOING OUT OF MY FUCKING MIND -- so he bought me a plane ticket to LA, thus allowing me to escape the construction crew subsequently descending on our otherwise peaceful casa. I use the term "construction" lightly as the landlord's mold removal technique is "just paint over it." Viva Mexico. 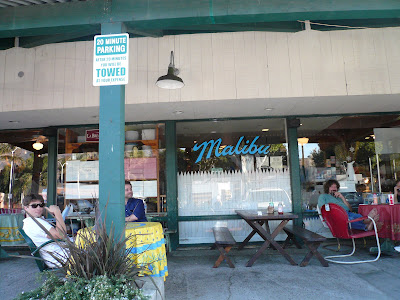 So, here I am in sunny Southern California for a couple of weeks at the beach. (I'll take smog over mold any day!) I took a drive up to Malibu yesterday to visit my old pie baking place--Malibu Kitchen--but things are just not the same... 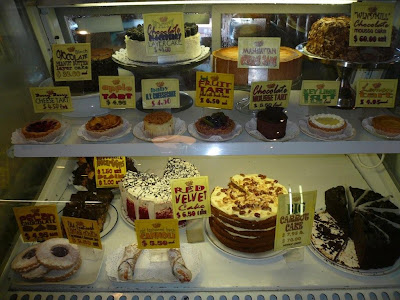 Mainly, there was no pie! Okay, so they had these little lemon tarts and apple bars. But as closely related as these may be to pie, these don't provoke the same warm, soothing sentiments as a whole pie! They do have some impressive cakes--and, if you look closely, you will see their prices are impressive too. $60 for one cake. Ouch. Welcome to Malibu. (My handmade pies used to sell for $20--a bargain considering the work and care that went into each one.) 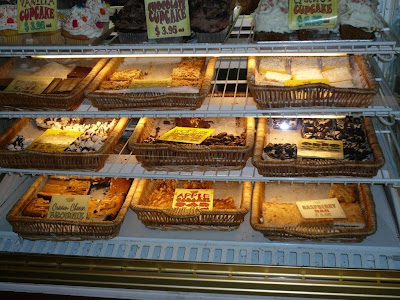 The other thing that has changed since I worked there (in 2000 to 2001) is the name. It used to be called Mary's Kitchen, because Mary Spellman was a partner. Mary, who is one of the most nurturing and loving people I know (she was my pie mentor), hails from The Hampton's on Long Island and was persuaded to switch coasts and open up this gourmet deli/bakery with Bill Miller (pictured below). But Bill is not exactly a warm and fuzzy person. Not only was he cruel to Mary (which sent her packing back to New York), he has a reputation of being extremely rude to his customers. In fact, he YELLED at me to stop taking pictures of his baked goods, and I almost started crying. I took a breath, turned around and stated firmly, "It's me, Bill. Beth." That didn't stop him from continuing his reprimand. 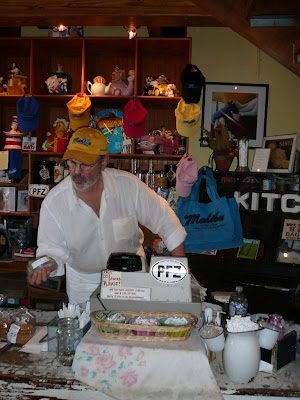 Well, that made me decide against buying ANYTHING in his store. And, in fact, I won't bother to go back again. The next time I want to revisit my Malibu pie baking days I'll go to The Hamptons to see Mary.
Posted by Beth M Howard at 10:22 AM

Email ThisBlogThis!Share to TwitterShare to FacebookShare to Pinterest
Labels: Malibu

sounds like a real fun place to avoid.the dessert are so pedestrian and commercial looking probably frozen. may you find a place that is worthy of giving them your money and enjoy yourself.

Thank you for your support. You should have seen the pies we used to make. Those display cases were filled with these HUGE mouthwatering pies, with sky-high meringue, overflowing fruit, crumble toppings like mountain peaks. Whenever I had a burnt edge or a blemished top, Mary's reponse was, "But it looks homemade!" And back then it was homemade. I'm just waiting for Mary to open up a new store in The Hamptons. (Mary, if you read this: hint, hint.)