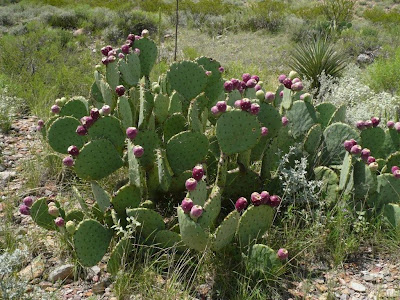 You know you’re living too far from a grocery store when you start seeing apples growing on the cactus…and wondering if they would do for a pie.
Posted by Beth M Howard at 11:00 AM No comments:

Upstaged by a Rock Star

It seems I’ve grow a bit cocky when it comes to bringing my homemade pies to dinner parties. Upon arrival, my pies – and, subsequently me – tend to become the center of attention – culinary and otherwise – robbing the limelight from the party host. Exclamations like “Wow, you made that?!” from fellow guests send my ego soaring. It’s the closest thing to feeling like a rock star. But last night at a Fourth of July barbeque I had a humbling experience. I brought a pie, a beautiful banana cream pie with a perfectly toasted meringue topping. It was a showcase pie, if I may say so myself. I listened for the predictable murmurings of “Who brought that gorgeous pie?” but seeing as it was a rather large gathering, one to which I had arrived slightly late, and the marinated filet mignon and bottles of exp 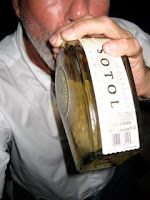 ensive tequila had already captured the attention of the guests, I silently left my pie on the kitchen table and went to find a glass of wine. I joined the others on the terrace overlooking Big Bend National Park and dinner was soon served. The steaks were, admittedly, phenomenal – juicy, tender, grilled to perfection – and the tequila strong and smooth.

When the dinner plates were cleared I prepared for my rock-star moment – the presentation of the homemade pie. But the host didn’t offer dessert. Another guest grabbed his guitar, along with the center stage, and entertainment was offered instead. The handsome dark-haired man strummed and sang, plucking the strings in soothing rhythms, his melodies in perfect harmony.
Leslie, a guest from Dallas, leaned over and asked me, “Do you know who that is?!” No, I didn’t. “That’s David Garza! He plays to sold-out audiences in Dallas and Austin. He tours with Fiona Apple. He’s got a bunch of albums out. I just paid $30 to see him in concert a few months ago.” She was giddy with excitement. “You cannot believe how lucky we are to hear him play!” 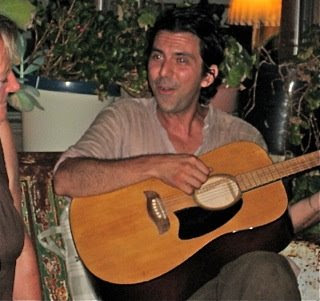 Indeed, his music was worthy of the attention he was getting, music I would definitely be looking to buy on iTunes. Still, as one hour of music turned into two I wondered if anyone remembered that there was still a pie waiting to be eaten. I could only laugh at what was a first for me – a lesson in pie humility: my rock-star pie had been upstaged by a real rock star.
At last, Mr. Garza took a break, upon which he and his elegant and earthy girlfriend, Nancy, announced they would be serving dessert. “We brought ice cream,” she said. Naturally, this rattled me. Huh? What about my pie?! But I kept quiet.

A few minutes later, still sitting in my far corner on the terrace, the night sky filled with only a few traces of fireworks, Nancy came by, graciously handing out plates, forks and napkins.
In her wake was David Garza himself, carrying not ice cream but my banana cream pie. He had cut it into mini-slices and was serving the small pieces with a silver pie server.

“Thank you,” I told him as he placed a piece on my plate.
“No, thank you for making this,” he replied with a warm smile.
“And thank you for your beautiful music,” I told him, looking into his gentle brown eyes. “You made this a very special evening.”

Then I listened, not to music, but to the people around me as they shoveled the little bites into their mouths, cooing with delight as the vanilla cream, bananas and buttery crust melted on their tongues. It was a very satisfying sound.

If there ever was a win-win, this was it – celebrating America’s Independence Day with a gathering of interesting people in the peaceful desert night; eating good, fresh food made with care; humming along to world-class music played from the heart; and ending the evening with pie. Given a dinner party this perfect, I look forward to a rock star upstaging my pie any day.
Posted by Beth M Howard at 4:03 PM No comments: