For those of you worried about me, you have Betty to thank for not only getting me out of bed as well as getting me out of the house, but Betty – not one to mess around – took it one big step further. “It’s time for you to face your fears,” she said as she drove us to breakfast on Sunday morning. First of all, I have never once been out for breakfast in Terlingua. So this alone was a big occasion, forget that the reason was to pull me out of the darkest depths of my self-dug pit. We were two miles into the five-mile drive to The Chili Pepper, where Huevos Rancheros awaited us, when she stepped hard on the brakes, turned the car around, and pulled over.

“Did you see the snake?” she asked. Yes, I did. It was, a long, pink slimy looking thing stretched out across the opposite lane. “It’s a red racer,” she said. “They’re good snakes; we like them.” I interpreted this to mean they are non-venomous. “I think it’s dead.” It didn’t look dead to me. Its eyes were open. It looked like it was just sunning itself on the traffic-free highway.

“Come on,” Betty said as she got out of the car. “Let’s take a look.” She trotted over to look at the snake while I lagged way behind. Before I had even got both feet out of the car she was already touching the snake, tugging at its tail. “BETTY!” I cried. “Are you crazy? What if it’s not dead?!”

“It will help desensitize you,” she promised. “Come on. I’ll take your picture.”

My heart was pounding, my pulse racing, as I stepped closer to the snake. I handed Betty my camera. We stood in the middle of the highway, void of cars, void of anything except the snake. The Sunday morning silence filled my ears. The only sound was the morning breeze traveling across the empty expanse of the desert. As Betty waited, I gave myself a little pep talk: It’s dead. It can’t hurt me. It’s dead. Nothing is going to happen. It’s dead. I need to do this. I need to get past this fear. It’s dead. It’s dead. It’s dead. I’m going to be fine. It’s dead. And then it occurred me: Oh, that Betty is very clever. She knows exactly what she’s doing. This isn’t about the snake. This is about my marriage. This is about the death of my relationship and the fear of going forward into the unknown, alone. “OK,” I said at last. “I’ll do it.” 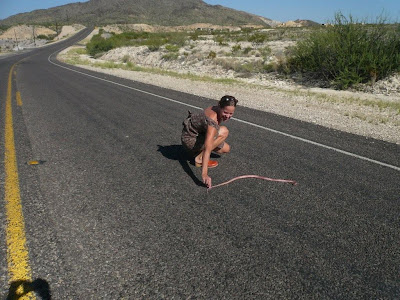 I am not proud of my snake-touching performance. I couldn’t touch it without making a face, displaying a look of distaste as my fingers stroked the rough, scaly skin. My heart continued to pound against my chest as I had visions of the snake springing back to life. But no, the snake was as dead as my marriage. The car that ran it over ensured its end was as definitive and final as the judge’s stamp on my divorce papers.

We continued on our way to The Chili Pepper, and once there I went straight to the Ladies’ Room to wash my hands. I let the water run over my hands for a few minutes, rinsing off the past, the fear, the grief, and the creepy feel of the snake’s skin that still lingered on my fingers – and I watched it all disappear down the drain. And then, at last, we ate breakfast. “I’ll have the Huevos Rancheros,” I told the waitress. “And bring the spicy salsa.”

Betty looked at me. “I thought you couldn’t eat the hot salsa.”

Bring it on, I say. Bring it on. And next time maybe I'll even be brave enough to touch a Mojave. As long as it's dead.
Posted by Beth M Howard at 11:41 AM No comments: