Jim Carrico returned to Terlingua and brought with him another batch of fresh rhubarb from his Colorado garden. In anticipation of his delivery I made a shopping run to Alpine for strawberries. Though the rhubarb cream pie I made from his last batch of the celery-like vegetable was a success I couldn’t get excited about making another one. It was missing something…. I was convinced it was the strawberries.

As I’ve mentioned before, it’s a 90-mile drive to the grocery store. That is how determined I was to get the berries to go with the rhubarb. But 90 miles is nothing compared to the 750-mile journey Jim Carrico made with the rhubarb. Anyway, I don’t mind the drive. I love my Mini Cooper and in it I can cover the 90 miles in an hour…or less.

With three pints of strawberries shriveling up in the back of my car in the 100-degree heat, I drove 40 miles over the speed limit to get my groceries home from Alpine to Terlingua. Speeding down Highway 118 with the stereo cranked, I saw something ahead on the road. Could it be? Yes! A snake 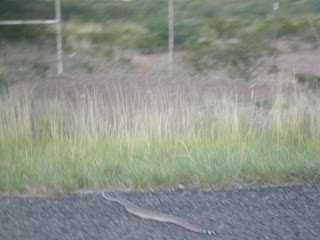 ! This time it wasn’t a dead Red Racer, but instead a full-size live rattlesnake, it’s tail distinctly marked with black and white stripes. Like Betty did last week, I stepped hard on the brakes, turned around, and drove back to the spot where I had seen the snake. Not only did I NOT get out of the car to touch the thing, I was too afraid to even roll down my windows! I watched it wiggle, raise its head, stick out its forked tongue and wave it at me (the horror!), and then slither off into the grass. I snapped a few pictures, but my hand was shaking too hard to hold the camera steady. 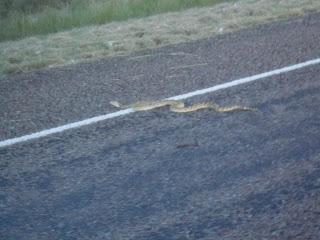 other object on the highway. Yes! Another snake! This time it was a green and yellow one, and also very much alive. Not a rattler, but still possibly poisonous. Again, I stopped the car (not easy to do when going100 mph), turned around, and snapped a few pictures with the windows closed – my hands still shaking.

I made it home before the strawberries died from heat exhaustion and was greeted by an email from Betty. The subject line read: “Yikes! A Rattler!” I opened the email to find a photo of a very mean looking rattlesnake attached. She, too, had spotted a snake on the road. Betty’s picture, unlike mine, was not blurry. Clearly, she has more snake courage than me. Her email said, “I took this for you.” Gee, thanks, Betty! “Never never never try to touch 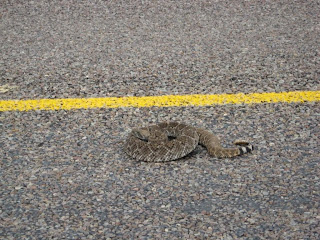 
It may seem like I am even more obsessed with snakes than I am with pie. When you live in Far West Texas, a place that moves you a little further down the food chain than you might be used to, you start to pay attention to anything that moves, creatures that could end your life or at least inject you with enough poison to make you very, very miserable for a while. So, yes, I suppose pie does take second place to that.

That said, I’ve got $25 worth of strawberries and three pounds of well-traveled rhubarb waiting in my refrigerator. Baking a few pies (one of which will be for Jim Carrico and his wife) should take my mind off of the snakes – and, hopefully, for a few relaxing hours while cleaning berries, chopping rhubarb and rolling dough I will forget about the spiders, scorpions, centipedes, coyotes, javelinas, and mountain lions too.
Posted by Beth M Howard at 9:45 PM No comments: