Just Another Part of Country Living 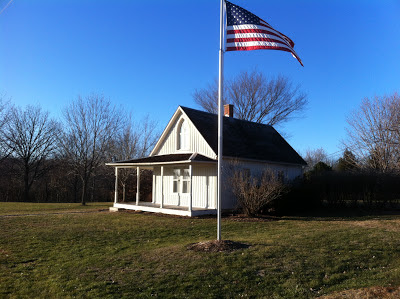 I live in the country, right next to a cornfield, in a very old house, so it is inevitable that at some point I would encounter the typical country house nuisance: mice. When I moved in 2 and ½ years ago the house had been vacant for several years. Vacant except for mice, at least the remaining evidence of them. I did a very deep cleaning before my furniture arrived and haven’t seen one trace of these little creatures since. Not one dropping. Nothing. I figured it was because I have two terriers, dogs that were originally bred as rat hunters (and not couch potatoes). But lately, with plummeting temperatures – and perhaps a little more time than usual spent traveling – I have had, er, visitors.

I maintain an extremely clean house. I have to. I run a pie business in it. Business or not, I can’t stand living in house that isn’t (a) kept neat and tidy and (b) scrubbed to the bone at least every two weeks. No professional cleaning service will get as deep as I do into the corners or use the hose attachment to vacuum in between the planks of the hardwood floors. I know, because I’ve hired – and fired – them. So you can imagine that any sign of varmints of any kind would send me into a fury. I have zero tolerance for uninvited guests of this nature. Nature is best enjoyed outdoors.

I just returned from a few days in Chicago and came home to some “gifts” left under my bathroom sink and, worse, behind my kitchen door. I spent the next several hours scrubbing, scouring and triple-washing with boiling water and bleach anything that had been sitting out. I used a whole bag of steel wool to fill in any and all possible cracks and holes and seams where the little f**kers might have been able to squeeze through. And I went into the basement to retrieve the box of glue traps that has been sitting down there, untouched, since before I moved in. I don’t have any experience in trapping mice, and since a trip to the hardware store to get any other kind of trap would be a two-hour commitment roundtrip (that's rural living for you), I figured I’d just use what was on hand. I put a dab of peanut butter in the middle of the plastic glue-filled tray, parked it in a corner of the bathroom (where the dogs couldn’t reach it) and finally sat down at my computer to get some “real” work done at last.

I wasn’t at my desk more than ten minutes when I heard a scuffle and some squeaking coming from the other room. Got one! Damn, that was fast! I took a peek and saw the little gray guy squirming to get free, his body contorting as he twisted and wriggled. If I could have seen his eyes I would have seen desperation, panic. The sight made my heart twist and wriggle. I could feel his despair, his panic. I heard him cry. And that made me cry. I ran out of the room.

I didn’t cry just a little. And I didn’t just leave the room. I flew upstairs and flung myself down on my bed, sobbing almost as hard as I did the day Marcus died. (Well, not quite that much. No, not even close.) What the hell was I supposed to do now? This poor thing. It was struggling for its life. And it could either die a slow miserable death or I would have to kill it.

And then the downhill spiral of internal reasoning and arguing began. I am not meant to live in the country. If I can’t deal with something that any other seasoned country dweller would solve without flinching then maybe I need to move back to the city. But I’ve lived in the city and what about all those cockroaches? Remember those huge ones and how they're so pervasive you can never get rid of them? Yeah, gross. Even tropical places like Hawaii have their own pests, like geckos crawling on their walls. And so went the solo dialogue with myself. Blah, blah, blah, blah, blah.

I sobbed and sobbed for at least a half hour, wondering why I could get so upset over one little mouse. I mean, I experienced far less emotion -- and far less existential angst -- over the six-foot-long snake in my bathroom. But snakes aren’t cute and furry. And I never had snakes as pets. I had hamsters when I was little. First there was Chestnut, light tan. Then Tanya, brown and white. I could still picture their sweet little furry bodies curled up in a ball as they slept in their nest of cedar chips. I could see the little exercise wheel spin as they ran and ran to nowhere.

There must be another way to deal with this, I thought. I dried my eyes and went back downstairs to my computer. I Googled “how to free a mouse from a glue trap.” I was somewhat buoyed to see I wasn’t the first person to search this as I hadn’t finished typing in all the words when the phrase auto-completed itself.

Yes, you could free it.

I read through the instructions carefully. “Put on thick gloves, pour vegetable oil on the mouse (but not so much that you drown it), put the trap with mouse on it in a sealed container bigger than the trap so it has someplace to get away from the trap once it’s free – be patient, it might take an hour for the mouse to get out of the glue – then take your container far away from your house before releasing it.”

I didn’t have vegetable oil, so I used my expensive extra virgin olive oil, dripping it slowly and carefully onto the mouse’s body. I watched through the clear plastic lid as he pulled and rocked and tugged until he found himself free. He sat on his haunches and cleaned his face with his front paws. This was a good start. I hadn’t killed him. I sat on the floor next to him and felt the weight of guilt and sadness lift off my body.

I gave him a few minutes to catch his breath while I suited up in my long underwear, overalls, long “sleeping bag” jacket, that wool hatwith the earflaps and my rubber farm boots. I picked up the plastic container with the mouse in it, and off we went, trudging across the field to freedom.

I carried him a half mile across the cornfield, pried the cover off the container and set it down on the frozen soil next to a tree. He hopped right out but then just sat there. He was covered in extra virgin olive oil. The oil on his coat would keep him from being able to insulate himself from the cold. I could swear I saw him shivering. And then it occurred to me: I had just given him a death sentence.

Which would have been more humane? Set him “free” into the deep freeze where he would never survive or kill him myself in a quicker way? (I hadn’t even begun to think of how I would have managed to do that. I figured I would just carry the creature, still alive, trap and all, down to Bob’s house, since Bob is an 80-year-old farmer and obviously knows a thing or two about doing away with mice. Especially since Bob played a part in killing the snake in my bathroom.)

The mouse moved, rustling his way under the leaves until he was almost hidden. I reached down and using a dry leaf tried to wipe off some of the oil. It didn’t work. I reflected back on what I could have done before we left the house. Give him a bath and blow-dry before sending him on his way? And cook him a hot meal while I was at it?

Then I thought of an article I recently read in “O”magazine, one of the best, most moving essays I’ve read in a long time, about an American couple who rescued a rat off the gritty streets of Hong Kong and how they came to love that rat as if it were a child -- their child. Should I pick up my oily little mouse and take him back home, let him chew up my sofa cushions and build him a five-story condo like the American couple did? (Seriously, though, you really need to read that article by Alexandra Harney. You too will fall in love with Mr. T the rat.)

No, in spite of how I felt we had created a bond by now, united in our quest for his survival, adoption was not in the cards for Mr. Mouse and me. I stood there for a few minutes, watching him disappear deeper into his leaf pile, and said a little prayer for him, wishing him well, and apologizing for turning him out into the cold. With all that oil on him.

I ignored my one friend when she texted me and said, “Get a grip. You got rid of that damn mouse. You should be celebrating.”

But I wrote my other friend back after she sent me a link of listings for humane, no-kill mouse traps, safe, comfortable little cages with doors to simply open and set them free. No glue. No oil. No drama.

“Thanks for the link,” I wrote. The mouse is now free. But what an ordeal. To use Marcus's word, perhaps it was all ‘self-inflicted.’ Then again, I can't help it if I don't like to kill things. Anyway after all that, I need a nap. Or a shot of whiskey.”

Oh, country living. It doesn't come without its challenges. But it is worth it. You just have to make sure to keep certain supplies on hand, namely a few (humane-style!) mouse traps, Kleenex, and liquor (whiskey or whatever). You never know when you might need it.

Related Post:
Interfering with Nature (when I tried to rescue an injured bunny from the side of a nearby country road)