I bought myself a bottle of my favorite white wine, La Crema Chardonnay, in anticipation of celebrating the end of a long, productive week.  But as they day wore on and cocktail hour approached, I felt less and less in a celebratory mood.

I took one of my two terrier-mixes to the vet this morning. My sweet little Mexican rescue, Daisy, grew up on the streets of Mexico and due to poor nutrition in her early years her bones and teeth are in bad shape. She was desperately in need of dental work so I made the appointment, dropped her off, and felt good about getting something done that is so helpful and important to her health.

Not so fast. No sooner did I get home, the vet called and said her blood tests showed that there might be something wrong with her kidneys or liver and that giving her anesthesia for the dental work could be risky. The blood will be sent to another lab for further analysis, but the results won’t be in until tomorrow. Oh, and Daisy may require further diagnosis before her decayed teeth can even be addressed. Instead of having relief over resolving her dental issues, I picked her up and spent the rest of the day fighting back my concerns (and tears) over the what-ifs and doomsday scenarios.

Yesterday my publisher said my cookbook was being sent to me via FedEx. She was sending an advance copy and it would be the first time I would see my new cookbook, Ms. American Pie, in print.  I spent the day in anticipation. Yes, this would definitely be a reason to crack open that bottle of wine. I’ve worked for a solid year on this one project. To see it in print for the first time would be a thrill. I assumed FedEx meant “overnight delivery.” I kept looking out the window all day. I saw not one, not two, but three FedEx trucks parked on the street at various times. I waited for the doorbell to ring. Nothing. I finally emailed the East coast office and learned that the book was sent via 2-day service—that’s 2 business days—so I won’t see the book until Monday. Fine. I’ve waited this long. What’s another 3 days.

I had surgery in December. Relatively minor. I won’t go into it. But it was something that has helped me tremendously by alleviating some ongoing pain. I was told my insurance policy wouldn’t cover it. But I found out just this week that, in fact, they paid a good portion of my medical bill. Pour me a glass of that wine now! This afternoon I opened a letter from them. “We are raising your premium.” Gee, thanks.

It’s 2 hours past the official start of cocktail hour and I still haven’t opened the bottle of wine. I’ve been too busy making pie. On the way home from the vet I saw a strawberry stand on the side of the road. It’s strawberry season in California. I practically slammed on the brakes to have a look—and a taste. I bought an entire flat of them and spent the afternoon baking—2 large strawberry crumble and 6 mini pies.
I always preach—and I know from experience—that doing something nice for others can make you feel better. I made the pie to share with some friends, neighbors, and the local handyman. And maybe the FedEx guy on Monday. Yes, thanks to that pie—the soothing task of making and rolling dough, slicing all those strawberries, crimping the crust edges—and making it with the goal of sharing it, I've forgotten all about the disappointments of the day. Yeah, well, sort of. 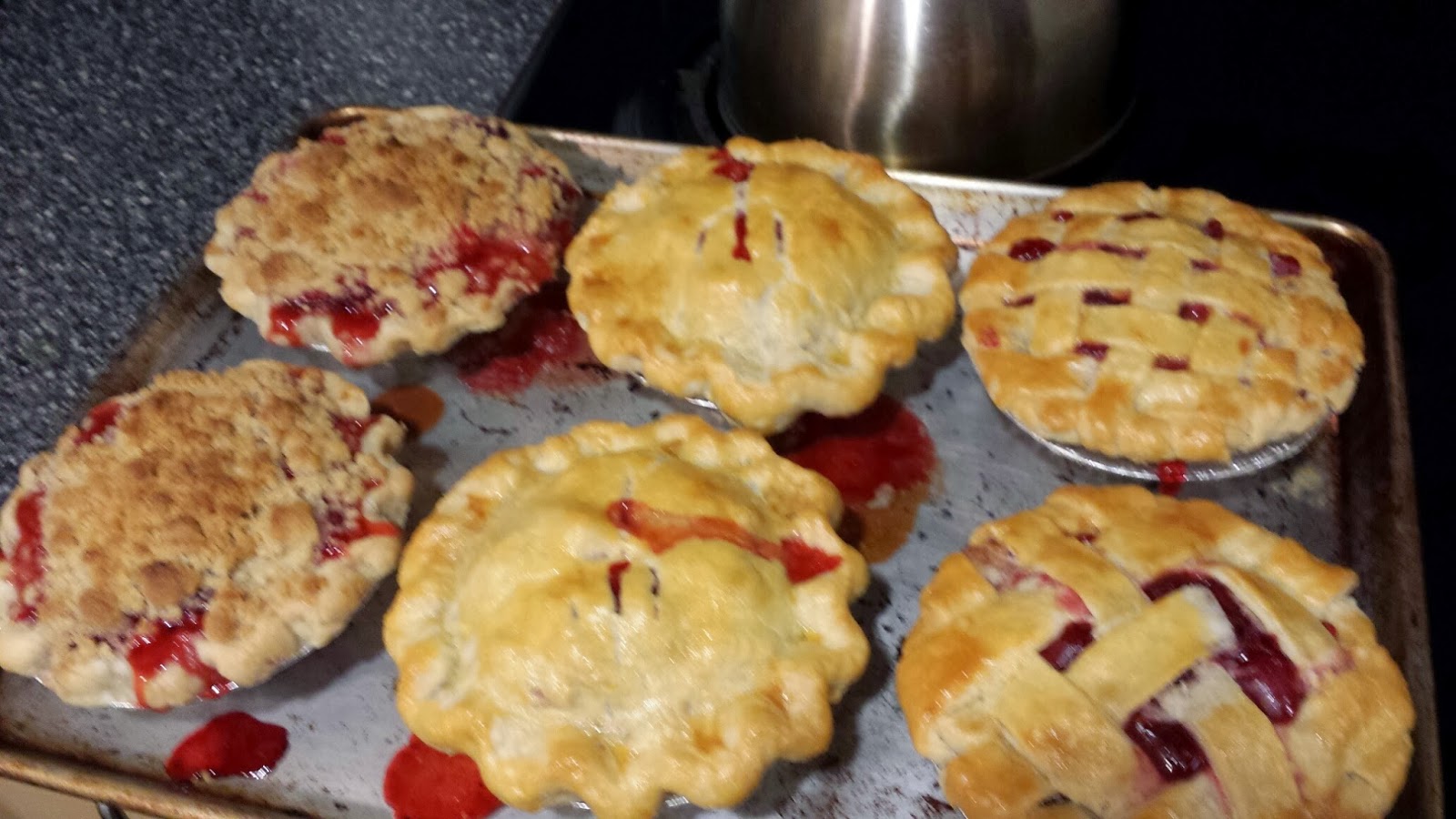 I’m going to get out the corkscrew now, pour myself a glass of that chardonnay, and go snuggle with Daisy on the couch. And because I know the lyrics of Alanis Morrisette’s song all too well and know how this day has already gone, I will bring the fly swatter with me.

Im wishing daisy and you a good healthy outcome.

Wow, I love strawberries...that a pie

Oh Beth, I must have overlooked this blog update. I am SO sorry to hear about Daisy !!! darn . it !!!! maybe by now you have heard better news on her, and even getting the dental work done. I know you are really missing your house.....seeing that picture of her on the porch even makes ME miss it. ;) May 1 will soon be here. <3