Could Today Get Any Better? 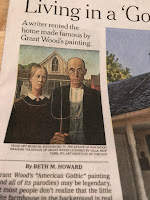 Today has been surreal. I woke up to discover that the story I wrote for the New York Times about living in the American Gothic House was placed on the front page of the Arts section.

Early this morning, a friend sent me a picture of the print version of the newspaper —since we don't get it delivered here on the farm. Taking up almost the entire page was a photo of me, dressed in overalls and braids, posing with a pitchfork in front of my beloved old house in Eldon, Iowa.

It was exciting enough to get a piece published at all in the mother of all newspapers, but to get a feature this big? Seriously, I am still in shock.

But the day just got stranger. In a good way.

I had been putting off a trip to the grocery store for days now, until—NYT excitement or not—buying groceries was imperative. I had been so busy, ahem, self-promoting my story on social media all morning, I forgot to eat, so I stopped at McDonald’s on my way to the store. (I was going to go to Cottage Cafe, but their parking lot was crowded and I figured I would be more anonymous at McD's.  Besides, I like their pancakes, plus they have lattes.)

I waited for the three people in front of me to order and then it was my turn.

“Do you still serve pancakes?” It was just before noon.

Phew! Adding an all-day breakfast is the best decision McD's has ever made.

“Great. I’ll have the pancakes and a small latte, no flavor."

A petite, redheaded woman was standing next to me quite close, and as I reached for my money to pay she moved in even closer.

I didn’t know what she meant. She was holding a receipt so I knew she had paid and was waiting for her order. As I dug into my wallet, she pushed her hand in front of me, handing a ten-dollar bill to the cashier.

I was so confused. What was going on? Why was she paying--for me?

“I’ve got this,” she repeated.

While she paid I just stood there, immobilized with disbelief for the second time today—and it wasn’t even noon!

We moved to the side to wait for our food. She looked straight ahead at the counter, not showing any further interest in me, nor in any desire for conversation.

“What made you buy my breakfast?” I finally asked.

“Just think of it as a random act of kindness,” she said. “Like paying it forward.”

I looked into her eyes for a moment, searching for the reason she had singled me out. There were other customers who looked like they needed a free meal more than I did. Surely, in Fort Madison, Iowa, she hadn’t read the New York Times, so I ruled that out. Did she recognize me as “the Pie Lady of Eldon?” Or had she read my recent blog posts about my despair with the world (as well as the recent loss of a friend to cancer) and bought me breakfast because she felt bad for me?

But she wasn’t going to say anymore or give me any specifics.

She still didn’t say anything. She wasn’t asking anything of me. She just wanted to do something nice, and I needed to be nice in return by simply accepting her gesture without demanding an explanation. Making a bigger fuss was only going to make her--make both of us--uncomfortable.

“Thank you,” I said. “I will just accept your gift graciously.”

The lump in my throat was so big it took me another minute before I could speak again. “I write about kindness in my blog,” I said, wiping my tears. “I’m going to write about you.”

She smiled shyly, but didn't say anything.

After another awkward pause, I added, “Funny enough, I was just thinking about that paying it forward idea on my way here. A friend of mine just did a huge favor for me and there is no way I can do enough to repay her. So I was going to tell her that I would pay it forward.”

I did not tell her that the friend is a staff writer at the New York Times who was responsible for connecting me with the Arts editor—not just connecting me, but pitching my story to her, the story that was on the front page of today's Arts section!!!

“How are the pancakes here?” she asked, changing the subject. “I always get the Egg McMuffin.”

Man, she was not going to explain anything more!

“They’re good,” I said. “But I almost always get the Egg McMuffin.”

“I like the lattes, too” she continued, “but not with any flavoring. That makes them too sweet. No whipped cream either.”

“Same here,” I said. “I drink the iced lattes in the summer. I like those a lot.”

“Sometimes they’re too milky, so ask for extra espresso. That’s what I do.”

The counter person handed her a brown sack—presumably containing an Egg McMuffin.

“Have a nice day,” she said as she left.

“You too. And thank you again.”

And that was it.


I took my tray and found a table by the window. I sat there looking down at my food -- tears landing on the plastic lid that covered the pancakes -- too emotional to eat.

This stuff isn’t supposed to happen to me. I’m the one who is always preaching about kindness, sharing, giving of yourself, building community, contributing something valuable to society, blah, blah, blah…you know how I go on about world peace (and world piece.) I expect to be the one to give, not to receive. And here, in the span of a few hours, I had received an overabundance of riches.

It was too much to handle.

I couldn’t stop crying. But the tears were not of grief or despair, or even tears of joy. They were tears of gratitude. Because today, surreal as it was, I was reminded —in newsprint and in pancakes— that I have so very much to be grateful for.

Never has a McDonald’s breakfast been so delicious.
Posted by Beth M Howard at 6:56 PM 13 comments: