Stay Calm and Bake Pie -- Episode 7: A Celebration of YOUR Pies 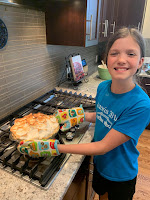 Episode 7 of "Stay Calm and Bake Pie" is here. It may be my favorite one, because it's a celebration of all the pies you've been making this month.

After watching it, my friend Kee Kee (who you read more about below) texted me this:


"When this pandemic started you told me you wanted to make a difference, and maybe go stock grocery shelves (I told you that was insane!), but what you are doing with your YouTube series is inspiring people to make memories with their families, and giving them the courage to bake pies themselves (and I’m sure that courage carries over to having more confidence in the kitchen making other yummy food for their families). Such a special special episode!!!!! Bravo!!!!!"

So I guess that answers that question I still keep asking myself: HOW CAN I BE OF SERVICE TO OTHERS?

Even if you haven't followed one of my pie lesson videos or made a pie, I can say with confidence that watching this video is totally worth 12-1/2 minutes of your time.

Again, thank you to everyone who has been participating in making and sharing pies. And because there were a few pictures that I either forgot or didn't make the cutoff time, I'm posting them here.

Let's keep baking, everyone. Let's keep doing whatever we can to make the world a better place.

I woke up this morning mad at myself, because... HOW COULD I HAVE FORGOTTEN to include these other pies? Especially when this one in particular is by my friend Kee Kee (see quote above). She made her husband Eric a cherry pie for his birthday a few weeks ago. Eric is Eric Troyer, the supremely talented musician who so generously wrote the "Ms. American Pie" theme song for my pie videos!  (Eric is a former member of ELO, now in the band called The Orchestra.)

Yoda, by the way, is Kee Kee's late dog. She made a "Yoda Pie" as a thank you gift to her vet after his passing and since then every pie she makes has Yoda's name on it. 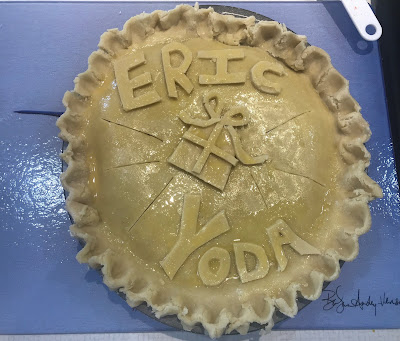 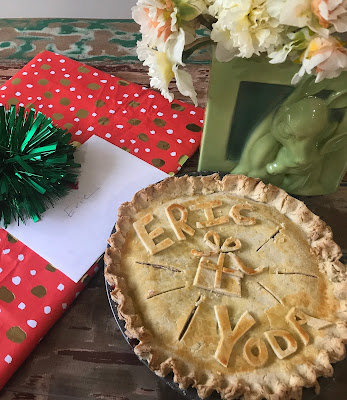 Eric not only contributed a song to my pie video series, he wrote a them song for the pandemic called "I Can't Stop Touching My Face." Kee Kee, a talented filmmaker, initiated the music video they made for the song, appropriately in their pajamas and bathrobes. Take another 3 minutes out of your day to watch this.  Then your face is really going to hurt from smiling. And I promise you will have this song stuck in your head for days. But it's a good song to have stuck. And it will make you more mindful about touching your face....as in don't!

My friend Dixie Wilson in Seattle has three very creative kids who, while cooped up at home, have proven just how industrious they can be. They set up a domino line that stretched the full length of the house. They wrote their own sermons for their stay-at-home Sunday church services. And they made pie!  Here is her 11-year-old daughter Madison making a banana cream pie. The pics came in just minutes after I posted the video and I was so sorry not to include them. But I realized my blog was a way to showcase them, and here they are.... 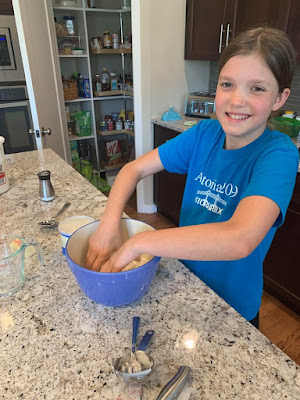 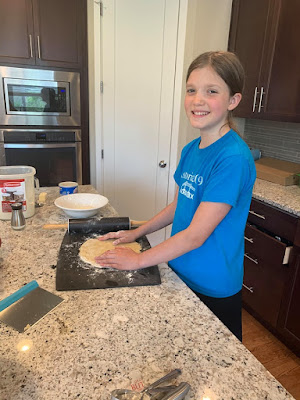 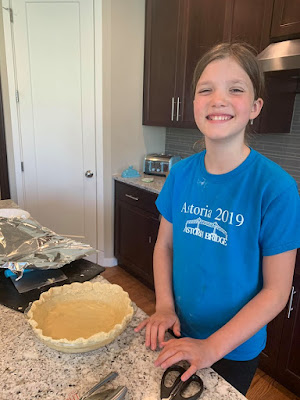 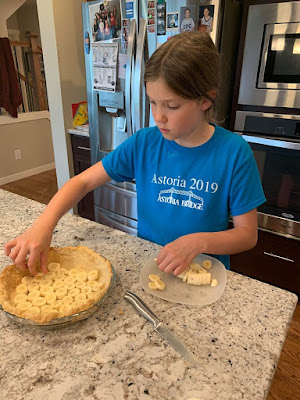 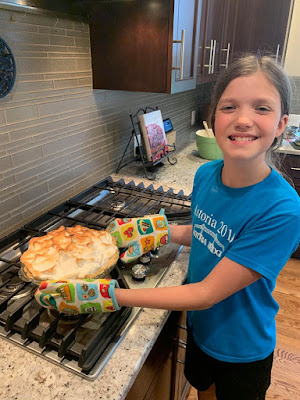 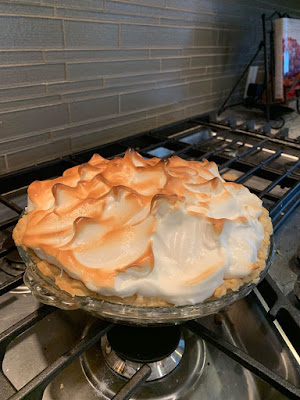 My friend Winky's daughter, Kay Kay, is a young musician who has been creating YouTube videos for her preschool-aged music students. She has taken her creativity a step farther by doing a pie-making video, demonstrating my key lime pie recipe. And she's taken this effort up a hundred more notches by conducting her demo in Portuguese! She is just learning her husband's mother tongue and, wow, am I impressed! For all the hours and hours I've spent studying German, Spanish, and French, there is no way I could teach a pie class in another language. Even if you don't understand Portuguese, this is fun to watch because Kay Kay is just so dang adorable.

Lastly, continue sending me pictures of your finished pies!!! I will post them in my "victory shot" album on Facebook. Or who knows? Maybe I'll have to do a second episode of your pies.
Posted by Beth M Howard at 12:10 PM No comments: 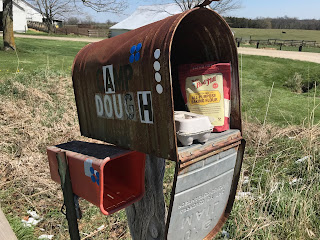 Because I had so many requests, I made a gluten free pie crust for this episode of "Stay Calm and Bake Pie."

I'm no expert on gluten free baking -- and I don't need to be! That is the whole point of this series -- to show you that pie does not have to be perfect to be good. People LOVE and appreciate a homemade pie, no matter how it turns out.

This pie crust is about managing your expectations. It won't roll out smoothly and lift into your dish the way regular pie dough does. It will be sticky. It will be messy. It will break. It will look like a disaster. AND....like an ugly duckling, it will still become a gorgeous, delicious swan of a pie. I promise!

Gluten free flour can be hard to come by these days, so if you can't find the GF all-purpose flour then use almond flour, or rice flour, or whatever GF flour variety you can find. The recipe is pretty much the same no matter which type of GF flour you use and it's a simple one.

For a double-crust pie, you will need:

3 cups GF flour (plus extra for rolling dough)
1 cup butter
2 eggs
Ice water (or milk -- some even use sour cream in addition to a liquid)
Salt
1 to 2 tablespoons sugar (optional)
2 teaspoons Xantham Gum (I didn't have any, but it can help bind the dough and give it elasticity)

Watch this episode to the end, because....baby goats. 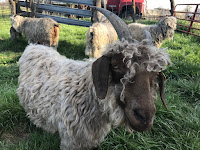 Lastly, please send me pictures of your finished pies!!! I will post them in my "victory shot" album on  Facebook.
Posted by Beth M Howard at 9:29 AM No comments: